Home Sports Pacquiao-Mayweather – how they fared against five common foes 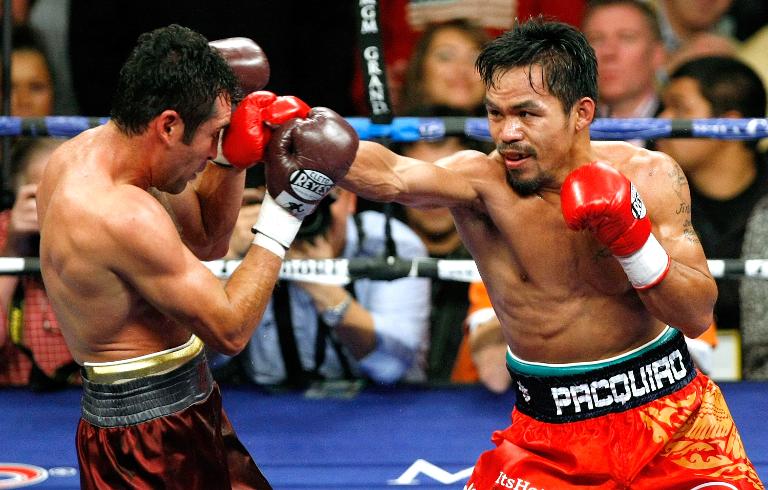 Days out from the blockbuster welterweight world title fight between Manny Pacquiao and Floyd Mayweather, a look at how they fared against the five opponents they have in common:

Mayweather faced boxing’s top draw, “Golden Boy” Oscar de la Hoya, on May 5, 2007, in a fight that broke records for gate receipts in Nevada, pay-per-view sales and revenue. In Mayweather’s first fight in the 154-pound (70 kg) division he weighed in at 150 (68 kg) but used his speed and agility to good effect against the bigger De la Hoya.

Mayweather struggled against de la Hoya’s jab in the early rounds, but adjusted in the second half of the fight to neutralize one of De la Hoya’s key weapons and emerged with a split decision victory.

De La Hoya was on the downslope of his career when he fought Pacquiao in December 2008.

The speedy Pacquiao got off to a strong start, connecting with clean straight left leads and continually beat De la Hoya to the punch. He battered De La Hoya in the seventh and after a round eight that was all Pacquiao De La Hoya’s corner stopped the fight, which was De la Hoya’s last.

While Pacquiao posted the more comprehensive victory over De la Hoya, even his trainer Freddie Roach said De la Hoya and his camp “did it to themselves” overtraining because of worries about making the weight.

Mayweather fought popular undefeated World Champion Ricky “Hit Man” Hatton on December 8, 2007. In front of a raucous crowd of the Briton’s followers in Las Vegas, Mayweather survived an early charge by the rugged Brit — who went up in weight for the bout — and went on to dominate the bout. He sent Hatton sprawling with a hook for a technical knockout in the eighth round.

Pacquiao faced the “Hit Man” on May 2, 2009 at 140 pounds, where Hatton had never lost a fight. Pacquiao dropped Hatton twice in the first round before knocking him flat with a left in the second round for a spectacular knockout win.

Mayweather was a heavy favorite against Mosley on May 1, 2010, but Mosley rocked him in the second round with a punishing right. Mayweather stayed on his feet and survived Mosley’s attempt to finish and by the middle rounds had the fight in his grip, with Mosley flummoxed by Mayweather’s accuracy and elusiveness.

Four months after that fight Mosley had looked awful in a 12-round draw with Sergio Mora, and it was after that bout that he met Pacquiao, on May 7, 2011.

Pacquiao knocked Mosley down on the way to a lopsided unanimous decision, Mosley looking even less of a threat against the Filipino than he had against Mayweather.

Pacquiao took on Cotto first, on November 14, 2009 on the heels of his victories over De la Hoya and Hatton.

After an action packed first two rounds, Pacquiao dropped Cotto in the third round and again in the fourth.

From there he punished Cotto, his speed and power too much for the Puerto Rican, and referee Kenny Bayless stopped the fight in the 12th and final round.

Cotto had bounced back from that defeat with a rematch win over Antonio Margarito in 2011 by the time he signed to fight Mayweather in a 154-pound bout and made Mayweather work for a 12-round unanimous decision.

Pacquiao has fought Marquez four times. They fought to a disputed draw in 2004, and then Pacquiao won decisions in 2008 and 2011 before Marquez knocked Pacquiao out in 2012.

Their bouts were fought at four different weights ranging from 126 pounds to 147 in one of boxing’s best recent rivalries.

Mayweather posted a 12-round unanimous decision over Marquez in September of 2009.