Home World Merkel government under pressure over US spy scandal 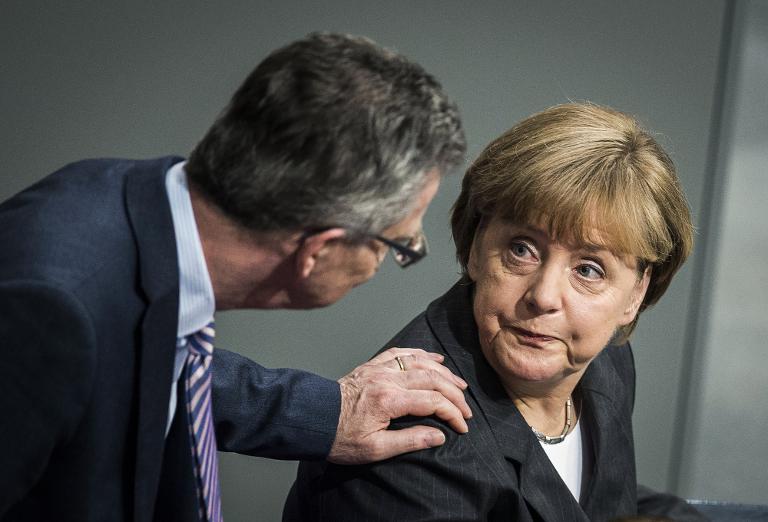 Chancellor Angela Merkel’s government faces growing pressure over claims that Germany helped the United States spy on EU leaders and companies, and that a ministry lied about it.

Analysts expect the popular Merkel to weather the scandal, but her close ally, Interior Minister Thomas de Maiziere, has drawn media and opposition fire over the “BND affair”, referring to the foreign spy service.

A core question is whether his ministry misled parliament when it claimed, as recently as April 14, to have no knowledge of alleged US economic spying in Europe, and of Germany’s alleged involvement.

German media have reported that US intelligence asked the BND to eavesdrop on the online, phone and other communications not just of terror suspects but also of France-based aviation giant Airbus, the French presidency and EU Commission.

Airbus said on Thursday it had asked the German government for information on the reports and would “file a criminal complaint against persons unknown on suspicion of industrial espionage”.

Bild, which usually supports Merkel, labelled her “hypocritical” for having voiced moral outrage over 2013 revelations that the US National Security Agency (NSA) had listened in on her mobile phone.

Merkel’s spokesman Steffen Seibert and de Maiziere have denied that the government misled parliament about the surveillance activities, pledging to share information behind closed doors to parliamentary panels looking into the secret services.

One opposition member of the secret services oversight committee, Greens party lawmaker Hans-Christian Stroebele, demanded Thursday that Merkel’s government come clean on what it knew and when it knew it, charging that “parliamentarians can no longer believe what the government tells them.”

“If it is indeed confirmed that her … friends in Paris were knowingly spied on by the BND … then things can hardly get any more embarrassing,” said Stroebele, a critic of US secret services who has visited fugitive intelligence leaker Edward Snowden in Moscow.

Merkel, known to sit out scandals, has only said that “now the priority is to completely clear things up”, days after her press team acknowledged “technical and organisational deficits within the BND”.

In a string of allegations, Bild and news weekly Spiegel said the NSA had asked the BND to use a monitoring station at Bad Aibling in the southern state of Bavaria to sweep phone numbers and email addresses, with defence group EADS, now known as Airbus Group, among the targets.

On Thursday the Sueddeutsche Zeitung said the BND had also engaged in “political espionage” when it helped the NSA snoop on “top officials at the French foreign ministry, the Elysee Palace and European Commission”, citing a source with knowledge of BND procedures.

European Commission president Jean-Claude Juncker said “this must be cleared up by German authorities and parliament … Then we will see.”

Opposition parties the Greens and the far-left Linke have seized on the issue, with the Linke’s Sahra Wagenknecht calling for de Maiziere’s resignation.

Political observers, however, said that so far they saw little threat to Merkel, who has won three terms and is ranked as Germany’s most popular politician in polls.

“It’s natural the opposition will attack … but the question is: can this in fact be cleared up?,” said political scientist Oskar Niedermayer of Berlin’s Free University.

“The experience so far with the NSA issue, including in the 2013 election campaign, has been that generally the population isn’t very concerned by this.”

His colleague Gero Neugebauer said the small leftist opposition was too weak to capitalise on the issue. Merkel, he said, would only face a threat in the unlikely event that her conservative party felt she could not win another term in 2017 elections.