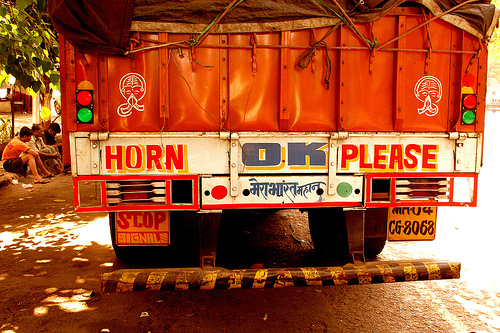 Mumbai: To get people to honk less, Â the Maharashtra state transport departmentÂ on ThursdayÂ issued a circular seeking a ban on the use of the phrase â€œHorn OK Pleaseâ€ on the back side of commercial vehicles, across the state.

Messages like â€œHorn OK Pleaseâ€ or â€œBlow Hornâ€ are often seen colourfully painted on the back of commercial vehicles, such as trucks and tempos, which often gives licence to motorists to honk unnecessarily.

Stating that this was aimed at a cultural change in the state, transport commissioner, Mahesh Zagade said, â€œWhen people see such signs behind buses, tankers, tempos, trucks etc they automatically feel the urge to honk. We want to do away with this practice and have issued a circular so that no such signs are allowed on vehicles in future.â€

According to Zagade, such signs often prompt people to unnecessary honk increasing the tension levels of motorists.

â€œThere is a need for a cultural change in this regard and this is a step towards achieving that. Honking leads to noise pollution which can be reduced by such initiatives,â€ added Zagade.

Regional Transport Offices have also been asked to take action against vehicles with such signs.

Stating that such stickers or signs are mostly seen on trucks and tempos, transport commissioner said that this rule would apply to all modes of transport, including private vehicles.

â€œIf trucks, tempos etc come from outside Maharashtra,Â they would also want to comply with this rule to avoid issues like harassment,â€ said a transportÂ official.

Transport department also plans to take other steps subsequently to reduce the practice of honking in the state.

Milind Bharambe, joint CP (traffic) said, â€œAt our end, the traffic police have also been trying to educate people so that they use their horns less. We have tied up with NGOs and other groups for this purpose.â€

A few transporters associations have welcomed the ban.

“Several years ago, roads were narrow and one really had to honk to alert the vehicle in front while overtaking. But this is not required of late. We have wider roads, four- to six-lane highways, and drivers can use lights and indicators while overtaking. There is no need to honk,” he said.