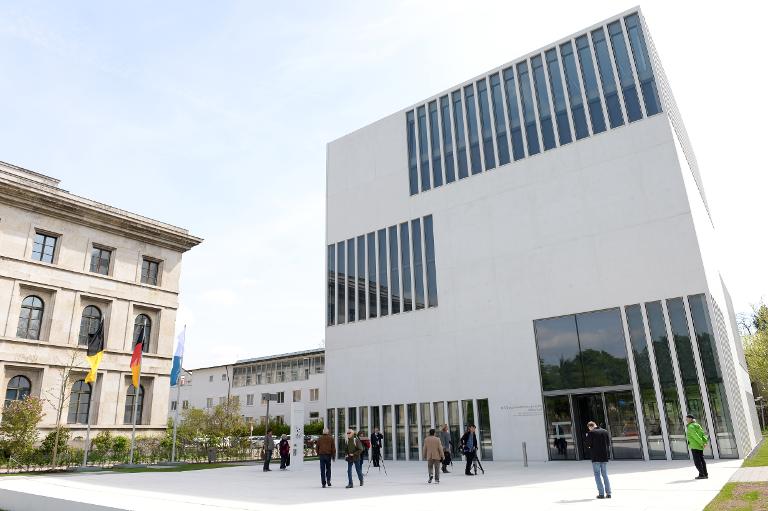 Munich opened a museum Thursday on the former site of the Nazi party headquarters, in a long-delayed reckoning with the German city’s status as the “home of the movement”.

The inauguration coincided with the 70th anniversary of the “liberation” of Munich by US troops at the end of World War II, and of Adolf Hitler’s suicide the same day in a Berlin bunker.

Ageing American veterans and Holocaust survivors joined political leaders for a solemn ceremony for the new museum, a modern white cube built among a few surviving neo-classical buildings in what was the Nazis’ organisational nerve centre.

Museum director Winfried Nerdinger admitted that it had taken Munich too long to face up to its toxic legacy as the birthplace of Hitler’s party, a fact long shrouded in shameful silence.

“Munich had a harder time with this than all the other cities in Germany because it is also more tainted than any other city,” said Nerdinger, the son of a local resistance member.

“This is where it all began.”

Mayor Dieter Reiter insisted Munich was ready to “face up to its Nazi past”.

As about 30 neo-Nazi demonstrators gathered outside behind security barriers and a larger group of counter-protesters, Reiter said those who questioned German democracy showed why such a museum was needed “here and today”.

The “Documentation Centre for the History of National Socialism” examines how Munich, which prided itself on its culture of tolerance, thriving arts scene and convivial beer gardens, could become the cradle of fascism.

The four-floor exhibition offers explanatory texts in English and German, and period photographs and videos documenting jackboot marches and the city’s utter destruction by Allied bombing.

A chilling video graphic portrays the city’s Jewish community at the time as points of light, with more and more extinguished as the deportations to the concentration camps gathered pace.

Nerdinger said he had no desire to showcase the Nazi “aesthetic” at the 28-million-euro ($31-million) museum with displays full of crisp brown uniforms and giant swastika flags.

Instead, visitors see artifacts such as hand-scrawled sonnets found in the pocket of resistance member Albrecht Haushofer, who was executed just before the war’s end. Blood still stains the paper.

The German Workers’ Party was founded in a Munich beer hall in 1919, and Hitler joined the same year.

In 1920, it became the National Socialist German Workers’ Party, the only political force allowed in the country after Hitler’s rise to power.

Following the failed Beer Hall Putsch of 1923, Hitler used his subsequent trial for high treason as a platform to gain a national following.

A thwarted communist revolution and a crippling economic depression helped fuel a backlash that would turn Munich into a “hotbed of reactionary sentiment”, as the novelist Thomas Mann called it in 1926.

Here far-right thugs would find funding and legitimacy from the wide swathes of the upper middle class, which saw in Hitler a saviour.

In 1930, the Nazis established their headquarters at the Braunes Haus (Brown House) in an upscale part of the city centre, now the site of the museum.

Even after Hitler became German leader on January 30, 1933 in Berlin, it was in Munich that the Nazis duped European powers into signing the fateful agreement decreeing that Czechoslovakia cede the Sudetenland, and launched the Kristallnacht pogrom.

Munich was also key to the planning of the concentration camp system, beginning with the first major prototype, Dachau, on the city’s outskirts in 1933. Chancellor Angela Merkel will attend a ceremony Sunday marking the camp’s 1945 liberation.

The museum itself was long in coming, with its opening postponed four times amid local infighting and its original director summarily sacked after she criticised Munich authorities.

Edgar Feuchtwanger, a 90-year-old Jewish native of Munich who fled to Britain in 1938, returned for the ceremony and acknowledged the city had a “difficult legacy to come to terms with”.

“People always ask me, ‘What did people think then? How could they have fallen for all that?â€™ And I have to say to them: Hitler seemed dramatically successful, he seemed like a magician,” he told AFP.

“And then when the rabbit came back out of the hat they didn’t notice or didn’t want to notice.”