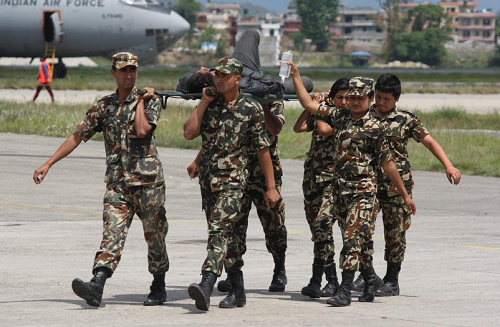 Kathmandu:Â Foreign SecretaryÂ S JaishankarÂ and National Security Advisor Ajit Doval arrived in KathmanduÂ on Friday to oversee the relief operations being carried out in earthquake-hit Nepal by India.

The duo will assess the rescue and relief efforts launched under ‘Operation Maitri’ to aid Nepal.

The Indian Army is on a war footing in Nepal. Personnel of the Indian Army and NDRF, who have stepped up their efforts to reach the far-flung areas devastated by the quake, are constantly providing all relief materials besides giving medical aid to those injured.

Cabinet Secretary Ajit Seth had earlier on Thursday assured all possible assistance to Nepal in terms of men and materials to combat the natural calamity, as instructed by Prime Minister Narendra Modi.

“The rescue phase is more or less winding down now and moreconcentration is there on the relief effort. On the directions of the Prime Minister, India has made all out attempts to extend whatever help we can, in terms of men and material, to be an assistance to the Nepalese Government,” he told the media in Kathmadu.

India has the largest rescue team in Nepal followed closely by China in the wake of the April 25 quake which killed thousands.Â

Meanwhile, the death toll caused by the devastating earthquake and aftershocks in Nepal has reached 6,110.

According to reports, 11,100 persons were found injured in the earthquake.

Three Indian Army medical teams have been deployed in Barpak village, the epicentre of the earthquake in Gorkha district.

Massive relief and rescue operations are on, but the multi-national rescue teams are facing difficulties in locating the survivors of the disaster in difficult terrain due to bad weather conditions.Â