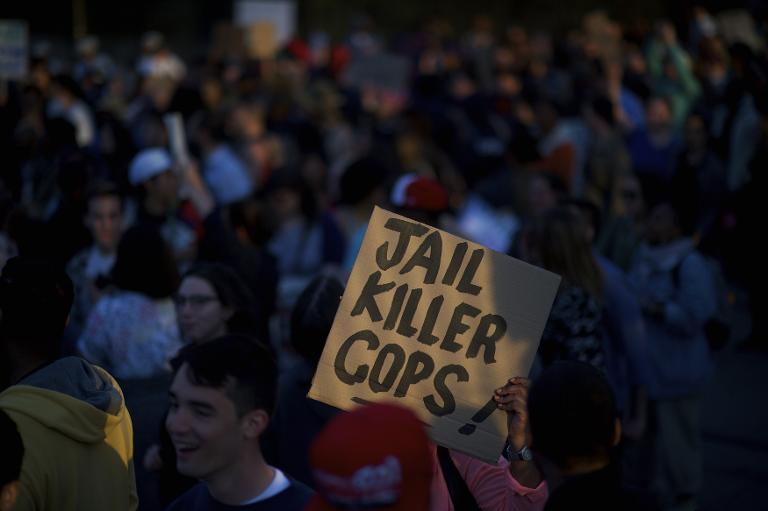 Baltimore police enforced a curfew for a third night, as new reports emerged over how the black man at the center of the latest US racial unrest sustained fatal injuries while in police custody.

Fresh protests had broken out in Baltimore and Philadelphia earlier over the death of 25-year-old Freddie Gray — the latest household name in the national debate over whether American police are too quick to use violence against blacks, especially young men.

As a 10:00 pm curfew began in Baltimore, officers formed a cordon and engaged in a brief but mostly non-violent confrontation with a handful of protesters. Afterwards, calm was restored and the streets were largely vacated.

The demonstrations echo protests that erupted in a St Louis suburb last year when a white policeman shot dead an unarmed black teenager, and then flared again in major US cities when a grand jury declined to indict the officer.

On Thursday around 600 people marched in Baltimore, a city of 620,000 an hour’s drive from Washington that has witnessed some of its worst unrest in decades.

But there was no immediate return to the scenes that made worldwide headlines on Monday when violence and looting shook the city following Gray’s funeral.

Gray died with 80 percent of his spine severed at the neck, lawyers for his family say, portraying him as just the latest young African American to die at the hands of the police in the United States.

The circumstances surrounding his April 12 arrest and how he sustained the injuries that killed him a week later remain murky and the subject of intense speculation.

Adding to the simmering anger, WJLA, an ABC affiliate, cited “multiple law enforcement” sources as saying that a medical examiner found the spinal injury was caused when Gray slammed into the back of the police transport van after his arrest, breaking his neck.

Adding to the intrigue, police revealed that the van made a previously undisclosed stop between when Gray was arrested and when the vehicle arrived at the police precinct.

Baltimore Deputy Police Commissioner Kevin Davis did not elaborate on the significance of this.

An attorney for Gray’s family, Mary Koch, told CNN that she had “no way of validating the information” and that a cause of death had not yet been rendered by the medical examiner.

About 600 people gathered in the “City of Brotherly Love,” police said, in what was a mostly peaceful march.

But a hardcore element briefly clashed with officers when they attempted to take the rally onto a freeway.

At one point protesters surrounded a police car, and later a push and shove ensued between demonstrators and officers who pulled out their batons, the Philadelphia Inquirer reported.

No one was seriously hurt and police arrested four people but later released two, the newspaper said, adding one officer was hit in the face by a bucket thrown from the crowd.

On Wednesday thousands of demonstrators hit the streets in Baltimore, New York — where police made 143 arrests — Washington and Boston.

Police and Gray’s family have repeatedly appealed for calm and an emergency nighttime curfew, running between 10:00 pm and 5:00 am, remains in place for Baltmore and will continue over the weekend, when large demonstrations are anticipated.

Since Monday’s riots, a total of 98 Baltimore police officers have been injured, of whom 43 required emergency medical treatment.

Detectives probing Gray’s death have handed their investigation over to prosecutors, but Batts urged people not to rush to conclusions.