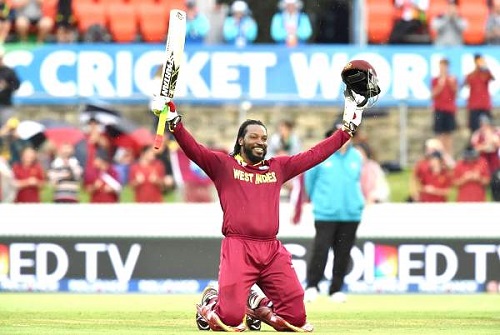 â€œIm jealous of my kids. Iâ€™ll never have a kid as cool as theirs.â€

Ladies and gentlemen, introducing Christopher Henry Gayle, who knows heâ€™s cool, so he doesnâ€™t mind indulging in some self-love. Chris Gayle towers above others, in all aspects. From his batting to his personal life, if thereâ€™s one word that fits the bill perfectly for this boom boom machine, itâ€™s got to be â€˜flamboyantâ€™. Clean and transparent too, who doesnâ€™t have too many secrets hauled up in his closet.

He wears a cap that boasts of many feathers. He just added one when he became the man with the most sixers in the history of T20 cricket — a whopping 500. And when we says heâ€™s far. far away in a constellation of his own, we mean the next highest isnâ€™t even anywhere loitering near 350. Such is his power, people, such is his power.

Like his on field avatar, which makes sure people get their moneyâ€™s worth, his off the field avatar is equally colourful. The cool Caribbean never hesitates to share a slice of his life with his loyal followers, giving regular sneak peekâ€™s into his much-happening life. Anyone who follows him on twitter can vouch for that.

So what makes Chris Gayle so much bunlike the rest of the pack?

The answer is the fact that heâ€™s a complete package. He enjoys everything that he does. Cricket isnâ€™t just a profession for him. He smiles, dances, breaks into an impromptu jig every time he dispatches the leather across the ropes, which means almost always youâ€™d find the tall, dark and handsome dude pulling off the antics that heâ€™s oh-so-famous for.

Heâ€™s got sheer power. The way he clobbers the ball is unparalleled. Might and bravado are what characterise this run machine. He single handedly managed to turn the tides around for Royal Challengers Bangalore, ever since he joined forces with them in 2011. Since then, RCB is more known for Gaylestorm than the other way around. That would perhaps make him that last correct business decision that Vijay Mallya took.

Heâ€™s jovial, mingles well with players from other teams as well. And then Gayle works hard and chooses to party harder, building up the required energy for being the heartthrob on the field the next day.

Overall, 500 sixers and just being at the tip of the iceberg, Gayle is a phenomenon that no one can define. When he blows with full force, he uproots the opposition completely.