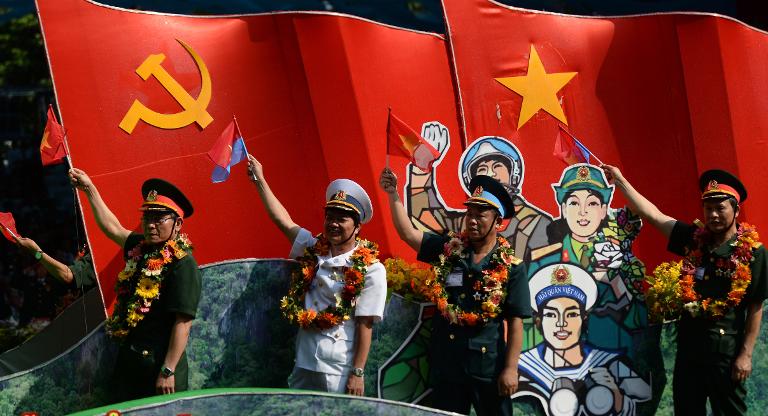 Vietnam’s premier on Thursday hit out at the “barbarous crimes” of its wartime American foe as the nation marked four decades since the fall of Saigon, an event that delivered a communist victory and a painful blow to US moral and military prestige.

The central streets of southern Ho Chi Minh City — formerly Saigon — were filled with a forest of hammer and sickle flags of the Communist Party, as regiments of goose-stepping soldiers filed past the country’s top leaders.

In front of Independence Palace — whose gates northern tanks clattered through in one of the iconic moments of the 1975 victory — Prime Minister Nguyen Tan Dung struck out at the US attempt to contain the spread of communism in Southeast Asia through war in Vietnam.

“They committed countless barbarous crimes, caused immeasurable losses and pain to our people and country,” he said in an address.

The war killed millions of Vietnamese — both civilians and combatants from the divided North and South — and left hundreds of thousands more wounded.

The physical effects of conflict still linger, including through deformities that Vietnam says are caused by the dioxin Agent Orange, sprayed by the US airforce to pare back the thick jungle used as cover by the northern guerilla forces.

Some 58,000 US servicemen also died in a war that remains seared into the consciousness of the American public, most often as a tragic waste of young lives and a symbol of the over-extension of power.

It was the first Cold War conflict to be extensively covered by the Western press — and the first to be lost by a modern superpower that thought itself unbeatable.

The communist victory was one of “ardent patriotism,” Dung said, hailing the reunification of Vietnam, which was cleaved apart in 1954 into the communist North and the US-backed South.

Veterans at the parade spoke of their pride at having fought the Americans.

“An event like this is necessary to help young people understand the glorious history of our country,” 72-year-old Nguyen Van Hung told AFP, wearing his old army uniform.

But divisions remain — up to a million “boat people” fled the South in the aftermath of the conflict and now form a vocal diaspora, staunchly opposed to Vietnam’s authoritarian one-party state.

An embassy spokesman said the US envoy will attend a low-key ceremony at the consulate in Ho Chi Minh City later Thursday.

Ties between the wartime enemies have warmed in recent years, with Washington drawing closer to Hanoi in the face of growing Chinese assertiveness in the region.

Communist Vietnam has also long since abandoned the Soviet model and embraced the market capitalism of its one-time enemy, ushering in a period of prosperity and growth.

With public discontent rising, the authoritarian state relies heavily on its past military victories to legitimise its rule, observers say.

People used to see the war “as one for national liberation and unification”, Tuong Vu, an associate professor of political science at the University of Oregon told AFP.

“These days most Vietnamese perhaps believe that the war was a tragic event during which Vietnamese killed other Vietnamese… the Communist Party is no longer seen as patriotic or invincible,” he said.

But local media, which is entirely state-run, has published fawning stories ahead of the anniversary, heavy on wartime heroism.

That official narrative still chimes with many among the older generation, but increasingly the public is indifferent or even hostile to such shows of official patriotism.

“Let the past go, it’s been 40 years,” wrote businessman Tran Minh Chien on his Facebook page in a typical social media reaction the anniversary.

Some residents in Ho Chi Minh City were also left unimpressed by the show of pomp.

“I don’t care about this parade — it’s bad for business,” said Nguyen Thi Dieu, 25, a vendor who sells cold water and snacks in the city centre told AFP.