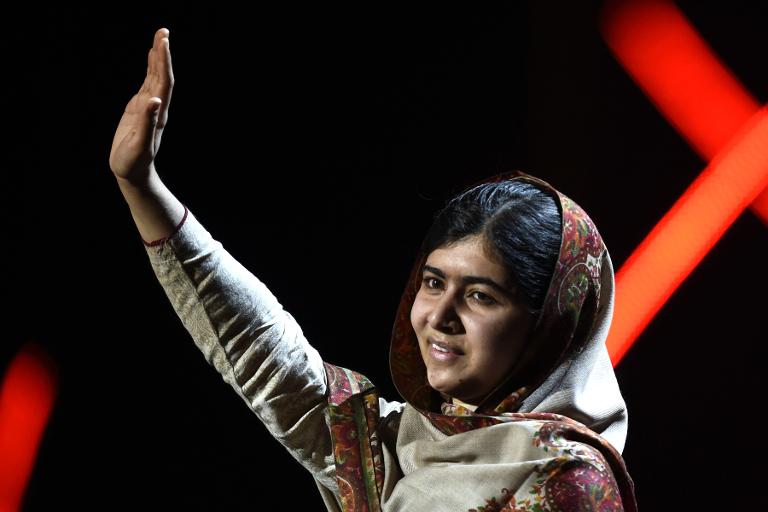 A court in Pakistan Thursday sentenced 10 men to life imprisonment for attempting to kill Nobel-prize winning teenage activist Malala Yousafzai in 2012, officials said, though the chief suspect remains at large.

Pakistani Taliban militants boarded the teenager’s school bus and shot her in the head in October 2012 for her outspoken views on girls’ education, in an attack that also wounded two of her friends and shocked the world.

Malala, now 17, survived and in October last year became the youngest winner of the Nobel Peace Prize in history for her courageous and determined fight for all children to have the right to go to school.

“Ten attackers who were involved in the attack on Malala Yousafzai have been sentenced to life imprisonment,” a court official told AFP. The news was confirmed by a lawyer present at the hearing in the northwestern town of Mingora, as well as a security official.

Life prison sentences in Pakistan are 25 years, and the convicts may appeal in a higher court.

The man suspected of actually firing the gun at Malala, named by officials as Ataullah Khan, is believed to be on the run in Afghanistan, along with Pakistani Taliban chief Mullah Fazlullah, who ordered the attack.

Pakistan’s military announced the arrest of the 10 suspects in September 2014 as part of an operation that involved the army, police and intelligence agencies.

The army spokesman Asim Bajwa said the group had a hitlist of 22 targets in addition to Malala, all ordered by Fazlullah.

Pakistan has been battling a homegrown Islamist insurgency for over a decade following the US-led invasion of Afghanistan, though the fighting has at times proved unpopular among those who believe Muslims should not wage war on their co-religionists.

Public opinion however has shifted heavily against the Taliban in recent times after a series of brazen attacks on civilian targets, including a school in Peshawar where more than 150 people — mostly children — were killed.

Most of the fighting is now concentrated in the tribal districts of North Waziristan and Khyber, which border Afghanistan, while Malala’s native Swat valley is now relatively peaceful.

Malala first rose to prominence in 2009, aged just 11, with a blog for the BBC Urdu service chronicling life under Taliban rule in Swat.

Under the Islamist militants’ bloody rule, opponents were murdered, people were publicly flogged for supposed breaches of sharia law, women were banned from going to markets — and girls were stopped from going to school.

In her autobiography published in 2013, Malala described receiving death threats in the months before the attack.

“At night I would wait until everyone was asleep,” she wrote. “Then I’d check every single door and window.”

Malala was flown to Britain for medical treatment following her attack, and the Taliban have vowed to kill her if she ever returns to her homeland.

But she has continued her activism, championing the cause of the 219 Nigerian schoolgirls kidnapped a year ago by Boko Haram militants, raising money for destroyed schools in Gaza, and calling for universal education at the UN General Assembly.

In spite of her accomplishments she remains an object of hate for many Pakistanis who view her as a Western agent on a mission to shame her country.