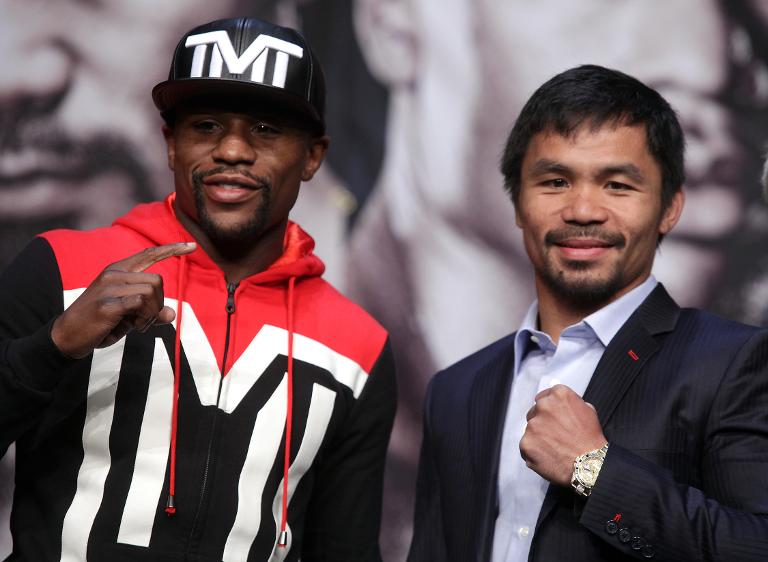 Floyd Mayweather said Wednesday his long-awaited showdown with Manny Pacquiao isn’t a battle of good and evil as the two rivals went eyeball-to-eyeball at their final pre-fight press conference.

“I am a realist,” said Mayweather, the 38-year-old American who has parlayed a perfect 47-0 ring record into a reign as the highest paid sportsman on the planet.

“This fight is not good versus evil. It is one fighter who is at the top and another.”

Pacquiao, a two-term congressman touted as a potential future president of the Philippines, is beloved as a humanitarian in his native land.

A devout Christian who has put womanizing and gambling days behind him, Pacquiao said Wednesday that his main aim in taking on Mayweather in what will be the richest fight in boxing history was to inspire the weak and glorify God.

Mayweather, an energetic trash-talker in his younger days, hasn’t been afraid to compare himself favorably to Muhammad Ali, or to flaunt the perks his wealth has brought — houses, cars, even an airplane.

Nor is Mayweather a stranger to violence out of the ring, serving jail time for one of several incidents of domestic violence.

None of that will matter on Saturday, when the two climb into the ring at the MGM Grand Garden Arena.

“I believe in my skills. I believe I will be victorious,” said Mayweather, who puts his World Boxing Council and World Boxing Association welterweight belts on the line against Pacquiao, the World Boxing Organization champ who boasts a record of 57-5-2.

For more than five years, contractual hurdles and animosity between the camps kept the top pound-for-pound fighters of their generation from meeting in the ring.

Pacquiao promoter Bob Arum, whose Top Rank Promotions is partnering with Mayweather Promotions to produce the event just as television rivals HBO and Showtoime have come together in a rare partnership, said the experience had been “hellish”.

But now the long-awaited bout is set to break all of boxing’s revenue records, capturing the imaginations of fight fans and casual observers around the world.

“I don’t take nothing away from Pacquiao, he is going to be an intriguing match-up on Saturday,” Mayweather said. “He didn’t get to where he got by not beating tough opponents.”

It’s that kind of measured respect that has Pacquiao trainer Freddie Roach doubting that Mayweather’s heart is in a fight from which he stands to make $200 million.

“I wonder if he’s going to show up,” Roach said shortly before the fighters took the stage at the MGM Grand’s 1,950-seat Ka Theater — usually the home of Cirque du Soleil.

Former heavyweight champion Mike Tyson strolled in — only one of the boxing legends, A-list celebrities and casino high-rollers drawn by the buzz surrounding the fight.

But the pre-fight festivities have offered few fireworks.

“I think he was forced into this fight,” Roach opined of Mayweather before the press conference, adding that he thought Showtime pushed Mayweather into the bout.

“I don’t think he wants to fight this fight. He didn’t get to pick his opponent.”

But the 38-year-old Mayweather said he just doesn’t need to indulge in the kind of brash talk that was the hallmark of his younger days.

“From the beginning of my career I have always had a game plan,” Mayweather said. “I make calculated moves in the ring and out of the ring. Me speaking loud and having personality I did that in the past.

“I’m a lot older and wiser, this fight sells itself. I don’t have to do it.”

A world champion in five weight divisions and closing in on Rocky Marciano’s iconic record of 49-0, Mayweather scoffs at the notion that the 36-year-old Pacquiao, winner of world titles in an unprecedented eight weight divisions will be the one to get past his consummate defense.

But Roach, who admits he has been studying Mayweather for years — ever since the fight was first supposed to materialize in 2010 — believes he knows the key to a Pacquiao victory.

“I think we have more speed, more power and I think we’re 100 percent ready for what he brings to the table,” said Roach, who is unimpressed by Mayweather’s unblemished record.

“I think losses make you a better person and a better fighter,” Roach said. “You learn much more from a loss than you do from a win.”