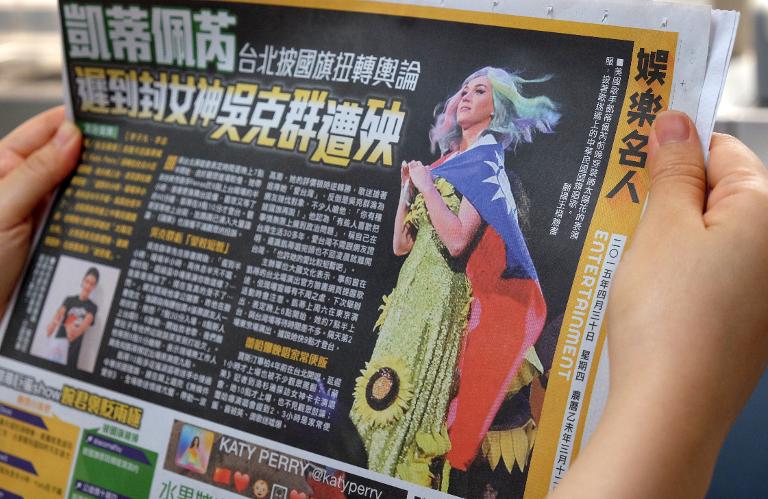 The intricacies of cross-strait diplomacy may not have been uppermost on her mind but Katy Perry caused a stir in both Taiwan and China with her politically tinged attire at a Taipei concert this week.

Singer-songwriter Perry moved fans to tears Tuesday, according to local media, after she appeared on stage draped in a Taiwanese flag at Taipei Arena, while donning a glittering gold dress adorned with sunflowers — the symbol of anti-China student protests in Taiwan last year.

Photos and messages that read “I am so moved”, “awesome” and “I love you” were posted on the Internet after the stunt, though it is still unclear whether she meant to make a political statement with her attire.

The flag was reportedly given to her by a member of the audience.

“Beautiful. Taiwan loves you,” read a message left by Chien Yi-ting on a fan page on Facebook, where many fans posted photos of flag-clad Perry.

“She’s so great. Wearing the flag. So many (Taiwanese) entertainers dare not do it,” wrote another message by Chang Fu.

But some Taiwanese fans voiced concerns for Perry, fearing a possible backlash from China, which still claims sovereignty over self-ruled Taiwan after the two sides split in 1949 after a civil war.

“She will have trouble holding concerts in China,” warned a Facebook message posted by Tsai Chen Wang.

“Her move touched a nerve in the sensitive cross-strait ties. Some Chinese fans are worried that she could be blacklisted and urged fans not to post that photo on Weibo,” reported the Apple Daily newspaper in Taipei, referring to China’s popular Twitter-like social network.

Perry, 30, known as “fruit sister” in China because of her colourful costumes, also managed to upset some fans.

“I’m so disappointed with fruit sister’s behaviour!” said one.

Others pointed out the move may have been an opportunistic one by pro-independence Taiwanese aware that Perry had worn the sunflower outfit on previous occasions.

“I think maybe some Taiwanese people have found the connection between her costumes and the flag and then brought a flag intentionally to the scene. It’s just terrible,” read a message on Weibo, China’s version of Twitter.

Perry’s US publicist was not immediately available for comment, but an official from the Taiwanese event organiser said the costume choice was not meant to be a political statement.

“We did not prepare the flag for Katy Perry. The sunflower dress is part of her regular concert attire and there is no political implication for it,” the official at Fanta Integrated Marketing Co. told AFP.

This is not the first time pop stars have attracted attention in China and Taiwan for perceived political stunts.

In 2013, Taiwanese singer Deserts Chang was forced to cancel a performance in China amid controversy about her display of a Taiwanese flag at an oversees concert. The incident sparked criticism from Chinese netizens, as well as a war of words on the Internet between Taiwanese and Chinese.

Taiwan’s pop diva A-Mei was also blacklisted by China for several years after she sang Taiwan’s national anthem at the 2000 inauguration of then-president Chen Shui-bian, known for promoting the island’s independence.

Tension with China mounted under Chen’s eight-year rule which ended in 2008, but has eased markedly since his successor Ma Ying-jeou took office on a Beijing-friendly platform.