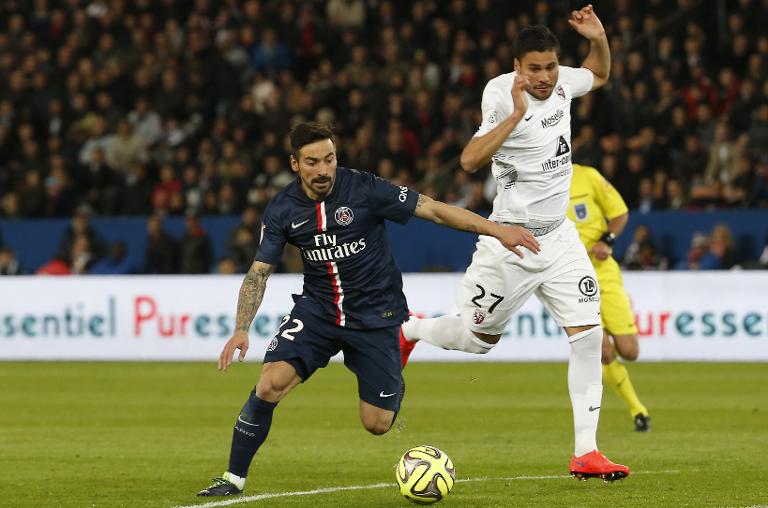 They have spent most of the season playing catch-up, but the Ligue 1 title is Paris Saint-Germain’s to lose after their 3-1 defeat of Metz on Tuesday moved them three points clear of Lyon at the top.

There was always a feeling that PSG’s expensively-assembled squad would pull through in the end against an exciting young Lyon side, and a run of five consecutive wins, in which they have scored 18 goals, has allowed them to open up the current gap with only four matches to go.

Any fears that PSG would take their foot off the gas following their deflating Champions League exit to Barcelona have been allayed with their displays in their last two outings against Lille and Metz.

Without the suspended Zlatan Ibrahimovic, the front trio of Edinson Cavani, Ezequiel Lavezzi and Javier Pastore has been outstanding.

Cavani bagged a brace and Lavezzi scored a hat-trick in the 6-1 demolition of Lille, while Pastore underlined his class with a hat-trick of assists against Metz.

Having already won the League Cup, and with a French Cup final to come against Auxerre on May 30, Blanc’s side are motivated by the prospect of securing an unprecedented domestic clean sweep.

Their remaining fixtures appear eminently winnable — they must visit Nantes and Montpellier and welcome Guingamp and Reims to the Parc des Princes, where they are unbeaten domestically in a year.

And perhaps the biggest concern for Blanc is how to bring back Ibrahimovic without it having a negative impact on those around him.

Ibrahimovic remains PSG’s leading scorer with 17 league goals but there is a feeling that the Swede’s influence is waning and, during his three-game ban for a spectacular outburst after the defeat at Bordeaux in March, Paris have scored 12 times.

“Honestly, I think the players are just as determined when Zlatan is there. Let’s not look for negatives,” tempered Blanc. “Maybe we would have scored 15 with him in the team too.”

PSG have already played 54 games this season but Blanc insists the desire to win more silverware is trumping tiredness.

“You don’t get the impression that the team has been playing every three days for two months. The players are still there physically. They still have the desire to win the ball back when they lose it. It augurs well,” he said.

“Good preparation means we still have some gas in the tank. We are still capable of raising our game.”

That sounds ominous for Lyon, whose coach Hubert Fournier has only recently started talking openly about the prospect of winning the club’s first title since 2008.

A run of 10 points from a possible 12 in April has them on the brink of securing qualification for next season’s Champions League, but Fournier is aiming higher.

“We are almost certain to finish on the podium now, but right now the podium is not our objective,” he said after last weekend’s 4-2 win in Reims.

Lyon have the tougher run-in, with home games against relegation-threatened Evian and European hopefuls Bordeaux as well as trips to Caen and Rennes.

Realistically they will need to win all these matches and hope PSG slip up, and recent history is not on their side.

The last team to throw away the title from such a strong position with four games remaining was Lens in 2002, although on that occasion it was Lyon who pipped them, beating their rivals on the last day to win the first of seven in a row.

The current Lyon team, with hungry youngsters brought through the club’s academy and led by 26-goal Alexandre Lacazette, is not about to give up the fight.

“There are still 12 points up for grabs and a gap of three points is not huge,” defender Samuel Umtiti told Le Progres.

“We still need to guarantee automatic qualification for the Champions League. Our other aim is to push PSG right to the end. We have what it takes to at least make them wait.”