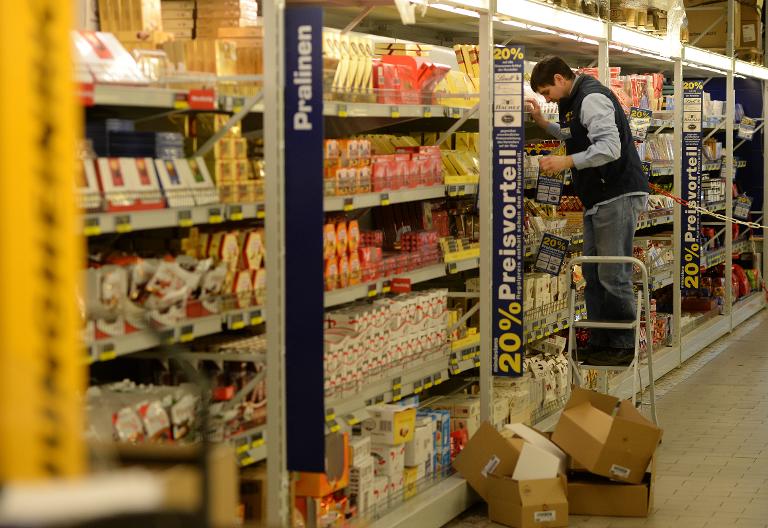 The eurozone exited four months of deflation in April, official data showed on Thursday, reversing a dangerous bout of declining prices, but problems remain and the recovery is weak.

Inflation in the 19-nation single currency bloc hit zero percent in April, after a drop of 0.1 percent in March, with low energy costs still impacting the cost of living, the EU statistics agency Eurostat said.

The data will help vindicate the historic decision by the European Central Bank in March to launch a controversial, more than 1.0 trillion euros stimulus programme to banish the spectre of deflation from the eurozone.

The ECB on Thursday said its measures appeared to have worked.

“After having reached low levels in mid-January.. the decline (in inflation) observed over the previous two years has thus come to a halt,” the ECB wrote in its latest economic bulletin.

Eurozone prices first fell into negative territory in December with a minus 0.2 percent figure followed by a much worse minus 0.6 percent in January, spooking analysts.

Economists fear deflation almost as much as rampant inflation because shoppers tend to put off purchases in the belief they may be cheaper in the future. This leads to a spiral of ever weaker demand, slowing the economy and pushing up unemployment.

It also makes slashing public debt and deficits much harder, a stark challenge to overspending countries like France and Italy.

Despite exiting deflation, after stripping out volatile energy and food prices, so-called core inflation still stood at a record low 0.6 percent, the same as in March, Eurostat said.

“It is too early to conclude that the threat of deflation has lifted altogether,” said Jonathan Loynes, economist at Capital Economics.

“It could yet return if oil and other commodity prices fall again,” he added.

Unemployment was unchanged at 11.3 percent in March compared to February, Eurostat said, and down from 11.7 percent a year before.

“This is not yet a sign of fading disinflationary pressures, as the painfully slow decline in unemployment evidenced in todayâ€™s unemployment data for March reminds us,” said Christian Schulz of Berenberg Bank.

“Overall unemployment dropped by 36,000 in March, but, at that pace, it would take 14 years to return to pre-crisis levels,” Schulz said.

As usual, the level of joblessness varied widely across the across the eurozone.

Unemployment in powerhouse Germany was unchanged at 4.7 percent, the lowest rate in the 19-nation single currency bloc.

The highest rate was in debt-stricken Greece, at 25.7 percent in January, the latest data available, which was slightly lower than 25.9 percent a month earlier.

Youth unemployment in Greece and Spain stood at a huge but lower 50.1 percent in both countries.

Worryingly, Italy, the eurozone’s third biggest economy, saw the jobless rate continue to rise to 13 percent, up from 12.7 percent in February.

EU-wide, unemployment in the 28 member states was also unchanged at 9.8 percent.

A week ahead of a general election, Britain’s jobless rate was at a low 5.5 percent, according to January data, a huge drop from 6.9 percent a year before in what could be good news for incumbent Prime Minister David Cameron.