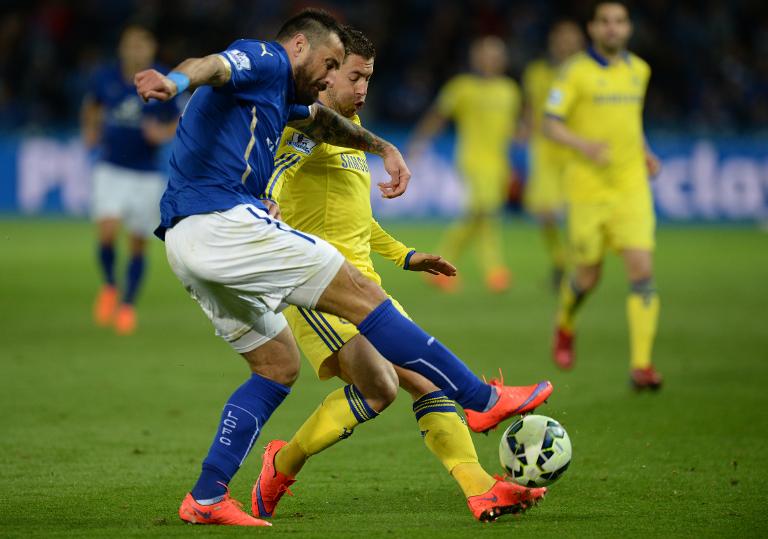 Chelsea took another step towards winning the English Premier League title as second half goals from Didier Drogba, John Terry and Ramires helped them overturn a half-time deficit to win 3-1 at in-form Leicester City.

Jose Mourinho’s side can now secure the crown if they beat Crystal Palace on Sunday after overcoming a scare against a side who looked far from relegation contenders on this evidence.

Leicester, who had won their previous four games, struck just before the break through Marc Albrighton and looked value for their lead until Chelsea raised their game in the second half.

Chelsea manager Jose Mourinho admitted he had been far from happy with the first-half display, though, he had to restrain himself from revealing what he said to the players at the break.

“If I repeat on television what I said it will be ‘peep peep peep’. Too many peeps!” said the Portuguese.

Mourinho, who has regained some of his lustre since returning after a largely underwhelming spell with Real Madrid, said Palace would not be a walkover on Sunday.

“Stamford Bridge is ready to celebrate but if I can ask something from them it is to not celebrate,” said Mourinho.

“We all want to win on Sunday but it will be a difficult game.”

His Leicester counterpart Nigel Pearson graciously said Chelsea would be worthy title winners and insisted his side would still avoid an immediate return to the second tier.

“There is a feeling we are capable and have given ourselves a better chance of avoiding relegation,” siad Pearson.

“Tonight is a setback because when you go ahead you expect to push on but we came up against a side able to take advantage of their quality in second half.”

Chelsea should have taken the lead though when Willian ran down the left and pulled the ball back for Drogba but his tame effort from 12 yards hit Marcin Wasilewski.

Leicester were dealt a blow when midfielder Andy King, on his 300th appearance for the club, was forced off with an early knock and replaced by Matty James.

The hosts shortly afterwards suffered another injury with Robert Huth coming off after an innocuous challenge at a corner with Ritchie De Laet coming on to necessitate a switch to a flat back four.

Those disruptions destroyed Leicester’s early rhythm and Chelsea came closer to the opener with Drogba firing wide on the turn.

Leicester might have taken the lead shortly afterwards as Albrightonâ€™s shot was deflected onto the post right footed by Paul Konchesky prompting a mass goalmouth scramble involving Cambiasso and Albrighton.

But they took the lead in stoppage time as James fed Vardy down the left and Cesar Azpilicueta slipped on the wet surface for Albrighton to slot in his first goal for Leicester and first since 2012.

Chelsea though regrouped at half-time and were level within three minutes of the restart.

Branislav Ivanovic cut in down the right and crossed for Drogba to finish in cool fashion and it prompted an emotional celebration at his first goal of 2015.

Drogba could have had a second as he twice went close, the first time blazing over and then firing over from a good position.

James’ deflected shot raised the tempo for Leicester but it was Chelsea who came into the game late as the hosts tired.

The game was over as a contest four minutes later as Fabregas pull back was driven how with power by Ramires while visiting fans were ironically singing “boring, boring Chelsea”, mocking taunts from Arsenal supporters during the goalless draw on Sunday.