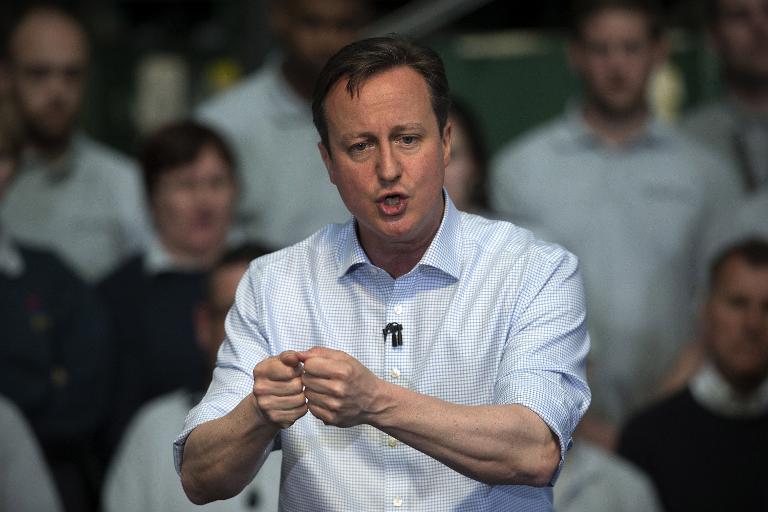 Gamblers are revelling in Britain’s knife-edge general election, betting record amounts of money on the race to take 10 Downing Street.

And the flow of punters’ money is showing the Conservatives winning a majority of seats, but Ed Miliband becoming prime minister after the May 7 vote.

With the polls neck-and-neck since parliament was dissolved on March 30, many commentators have branded it a dull contest — not so bookmakers, with the uncertainty triggering a betting bonanza.

“We wouldn’t call it a flat campaign at all: it’s the biggest political betting event we’ve ever seen,” said Graeme Sharpe, spokesman for bookmakers William Hill.

Cameron’s Conservative Party is battling it out with Miliband’s Labour opposition — though neither one is unlikely to win a majority of seats, meaning the election outcome is anything but clear.

“The only consensus around this election is that there’s going to be a mess,” Paddy Power spokesman Rory Scott told AFP.

“A hung parliament is a done deal. We’re offering 1/14, which is a 93 percent chance of it happening,” he said.

One man bet Â£200,000 on a hung parliament when the price was 2/9 — the largest general election bet any bookmaker has ever taken, according to Sharpe.

To form a majority government, the two major parties would have to team up in coalition with smaller parties. Bookmakers are offering odds on 32 different possible combinations.

“Spare a thought for the poor civil servants drafting scenarios for each of those situations,” said Scott.

Indeed, betting chains are comparing this election with Britain’s biggest horse race due to the myriad eventualities.

“We’ve termed it the first political Grand National. All in all, it’s a remarkable event,” Sharpe told AFP.

Voters may tell pollsters one thing but they’re much more likely to go with their real feelings when they’ve got money staked on it — and that’s why election pundits look at the odds as much as the opinion polls.

Despite the polls flatlining, bookmakers report a clear recent switch from people backing Cameron and the Conservatives to Miliband and Labour.

“Up until a week ago 75 percent of the money was on a Conservative win,” Scott said.

“In the last week there’s been a big, big shift. Miliband is now the heavy favourite.”

– Bets on Cameron to lose power –

The centre-right Conservatives are still the bookmakers’ hot favourites to win the most seats at 1/4, with centre-left Labour 3/1, but conversely, Miliband is 8/13 to become prime minister after the election, with Cameron 5/4.

This is because Miliband can probably count on the smaller left-wing parties supporting a Labour minority government.

“You put all those together and there’s your next prime minister,” said Scott.

Punters can bet on almost anything: each of the 650 seats, most seats overall, most votes, which parties will be in the government, and who will be prime minister being among the most common.

There were also plenty of so-called novelty markets on election campaign cliches: which leader would literally be the first to roll up their sleeves, lay a brick, or wear a hard hat.

One “really complicating factor” has been the “absolutely sensational” rise of the pro-independence Scottish National Party, Sharpe said.

The SNP won six seats at the 2010 general election. Ladbrokes now have the left-wing secessionists at just 4/1 to win all 59 Scottish seats — something that would have been at least 100/1 only months ago.

“If it was all a done deal, people wouldn’t be betting,” said Scott. “Another general election next year — that might be a good bet.”