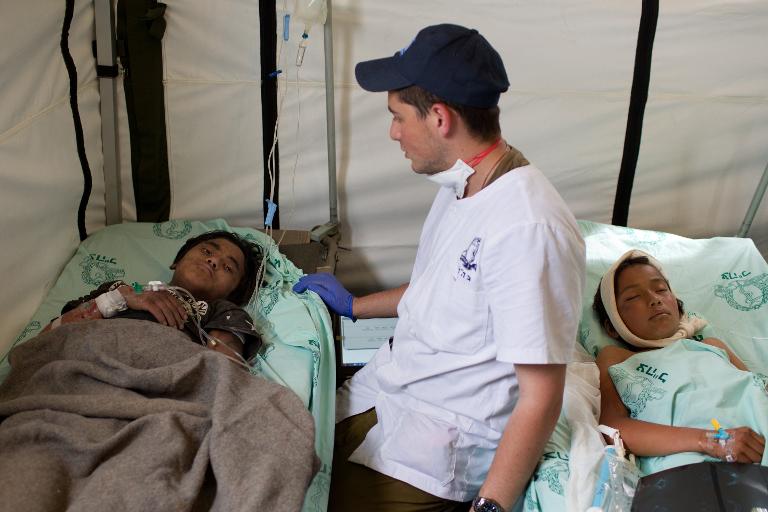 Rescuers pulled a 15-year-old boy alive from the rubble of Nepal’s earthquake Thursday, bringing a rare moment of joy to the ruined capital Kathmandu, five days after a disaster which killed nearly 6,000 people.

The rescue of Pemba Tamang, who told AFP that he stayed alive by eating ghee, was hailed as a miracle and greeted with cheers from crowds of bystanders who massed to watch the drama unfold at a ruined guesthouse.

But the recovery of another teenager’s body from the same ruins only minutes later underlined how the prospects of finding further survivors of Saturday’s 7.8-magnitude quake were becoming more remote.

Caked in dust, Pemba was fitted with a neck brace and hooked up to an intravenous drip before being lifted onto a stretcher and then raced to a field hospital where he was found to have only minor cuts and bruises.

“I never thought I would make it out alive,” the teenager told AFP at the Israeli military-run facility where he was being kept for observation.

Pemba, who worked at the guesthouse as a bellboy, said he had been eating lunch next to reception when the ground started shaking.

“I tried to run but… something fell on my head and I lost consciousness — I’ve no idea for how long,” he said.

“When I came round, I was trapped under the debris and there was total darkness,” he added.

“I heard other people’s voices screaming out for help around me … but I felt helpless.”

Asked if he had had anything to eat while he was trapped, Pemba said he had come across a jar of ghee (clarified butter) in the dark.

“I don’t know where it came from,” he added.

Libby Weiss, a spokeswoman at the Israeli field hospital, said Pemba was doing “remarkably well”, confirming he did not have any major injuries.

“I don’t have any logical explanation. It is miraculous. It is a wonderful thing to see in all this destruction.”

While Pemba appeared to have emerged from his ordeal largely unscathed, a man who was rescued on Tuesday night after being trapped for 82 hours was coming to terms with having his leg amputated.

Speaking to AFP in his hospital bed, Rishi Khanal, 28, recounted how he had given up hope of being found alive and felt that he had been given “a second life” but worried about how he would now fend for himself.

“I thought I would work, I would earn… how will I after this?,” said Khanal who had been on his way to a new job in Dubai when he was caught in the quake.

Launching an appeal for $415 million in aid, the UN said it would take a marathon effort to help the people of one of Asia’s poorest countries.

The UN’s World Health Organization said it had received reports that around 1,400 had been killed in the Sindhupalchowk region, a mountainous region northeast of Kathmandu which was becoming a major focus of international relief efforts.

Nepalese and Indian military helicopters have also been flying in aid to remote areas of Gorkha district, another badly-hit region, which otherwise takes up to 12 days to reach by foot, the WHO said.

“But the needs remain great, with helicopters unable to reach some communities due to poor weather and steep hillsides,” said a statement. “Reaching these communities and providing health support is essential.”

The latest official toll put the number of dead at 5,844 and more than 10,000 are known to have been injured. More than 100 people were also killed in neighbouring countries such as India and China.

Although the number of aftershocks since Saturday’s quake has subsided, fresh tremors were felt in Kathmandu overnight.

Some people who had spent the past four nights camped out in the open for fear of aftershocks spent their first night back home.

But a significant number are still living on the roadside or open ground, according to AFP correspondents in the ruined capital, which is normally home to some 2.5 million people, including many migrant workers.

“I don’t know how long we are going to do this. How long can we live on the street?” said Rajina Maharjan after another night camped out in a tent outside her house with her husband, in laws and a four-year-old son.

Hundreds of thousands of residents have fled the city since Saturday, fearing aftershocks and wanting to inspect the damage back in their families’ villages.

Signs of normal life were returning Thursday to Kathmandu, with shopkeepers opening, some for their first time since the quake, and vegetable vendors laying out produce at devastated Durbar Square.