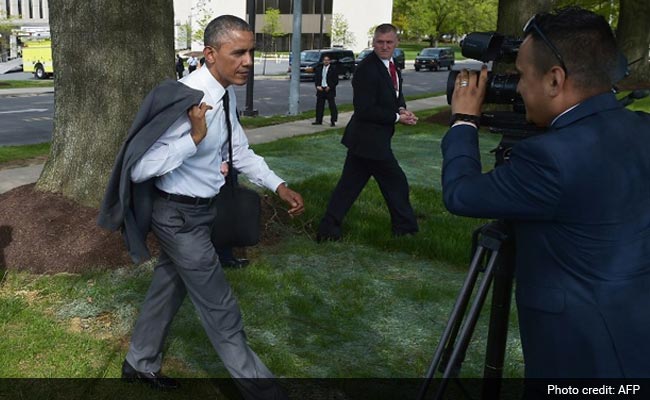 Washington: With Washington’s unusually long winter hopefully over, President Barack Obama took a break from the confines of the White House to take a short stroll on the streets — something he did last year too.

At noon, under a cloudless blue sky and a balmy 22 degrees Celsius temperature, Obama, wearing a black tie and white shirt, but no jacket walked out of the presidential mansion’s northwest gate with 2015 National Teacher of the Year Shana Peeples, according to a pool report.

The President and Peeples, an English teacher at Palo Duro High School in Amarillo, Texas, whom he had honoured in a Rose Garden ceremony shortly before, walked across Jackson Place and up the street to H Street.

He then stopped at Teaism, an Asian-inspired tea house just across the street from Lafayette Park in front of the White House. A few people sitting at outside tables waved as Obama walked by.

“Good to see you,” the President told the onlookers, according to the pool report. “I’m taking a walk. It’s a beautiful day.”

Obama and Peeples then walked into the shop and emerged seven minutes later.

He was carrying a brown paper shopping bag and plastic cup “filled with a liquid that appeared to be tea”, the poll report said.

They headed back down Jackson Place and walked through the White House gate nine minutes later — to take care of the world’s problems once again.

In May 2014 too, he had surprised tourists on the National Mall, choosing to walk rather than ride to a meeting at the interior department.

Three weeks later, he did it again walking a block and half to a nearby Starbucks for a cup of coffee with Chief of Staff Denis McDonough telling a staffer on the way out, “the bear is loose again”.