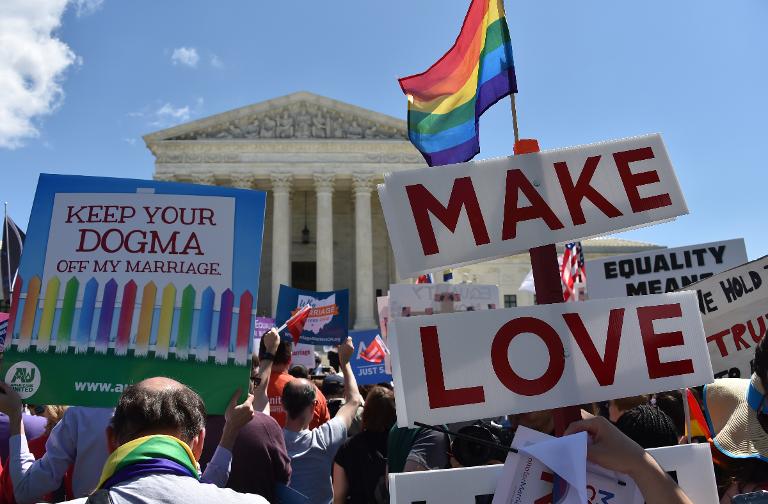 The US Supreme Court appeared divided Tuesday on whether same-sex couples have a constitutional right to wed, as it weighs a potentially historic decision that could see gay marriage legalized nationwide.

Hundreds of activists from both sides of the debate rallied in front of the high court in the nation’s capital as the nine justices inside heard a case on one of the most polarizing social issues facing the country.

The court appeared to split along its usual ideological divide, with its four liberal members seeming to favor what Justice Ruth Bader Ginsburg called a “change in the institution of marriage.”

But the conservatives, led by chief justice John Roberts, expressed concern during the 2.5-hour hearing about a stark transformation of an age-old tradition.

“You’re seeking to change what the institution is,” Roberts said, warning the plaintiffs’ counsel: “If you prevail, there will be no debate, closing the case is closing the debate.”

Justice Anthony Kennedy — seen as the likely swing vote in the case and the author of past opinions that expanded gay rights — seemed to give credence to both sides of the debate.

He stressed it would be difficult to change the traditional notion of marriage as a union between a man and woman.

But he also noted that “same-sex marriage can’t have a more noble purpose… ‘We can’t procreate but… we too have a dignity that we want to fulfill.'”

Experts say recognition of same-sex marriage — legal in 37 of the country’s 50 states and in the capital Washington, but not recognized everywhere — seems inevitable.

The court heard from plaintiffs from four states — Ohio, Michigan, Tennessee and Kentucky — where gay marriage is still barred.

Supported by the administration of President Barack Obama, the 16 plaintiffs want their marriages to be recognized as constitutionally protected in all US states.

Their home states currently define marriage as being between a man and a woman, and do not recognize gay marriages carried out elsewhere in the country.

If the Supreme Court were to rule in favor of the plaintiffs, it would thus make a de facto decision against all 13 states banning gay marriage.

“They deserve the equal protection of the law, and they deserve it now.”

People queued for days for a chance to hear the arguments, and activists for and against marriage equality rallied in front of the court.

Gay rights activists, including some of the plaintiffs, unfurled the rainbow flag of their movement and held signs proclaiming: “Marriage is our constitutional right.”

Inside, one spectator yelled out at the start of the hearing: “Homo sex is an abomination to God.”

The justices, who are due to hand down their ruling in about two months, “really hold our lives in their hands,” said Colleen Condon, 44, who traveled from South Carolina for the proceedings and recently married another woman.

Thom Kostura and Ijpe DeKoe, two of the plaintiffs in the case, could not hide their emotion.

“There was so much support out here when we arrived, and when we went into the courthouse, I had no idea how many more people had arrived while we were in court,” Kostura said.

At issue is the Supreme Court’s interpretation of the 14th Amendment of the Constitution, which provides for equal protection under the law.

Justices must decide if this amendment means states are required to recognize marriages that were conducted in other states.

In a landmark decision in June 2013, the court struck down a law denying federal benefits to homosexual couples.

But it stopped short of endorsing same-sex marriage nationwide, leaving that question to states — even though the court traditionally protects federalist principles.

The four states involved in this case, which are backed by religious and conservative organizations, argue that marriage is based on the biological compatibility of a man and woman.

But the Michigan plaintiffs argue that “whatever limits may be imposed on the right to marry, the gender of the partners cannot be one of them.”

They also maintain that the four states in question violate their freedom to travel by refusing to recognize legal marriages carried out in other states.

In a sign of the case’s divisive nature, a record of more than 150 briefs — 20 by the parties and 130 amicus curiae or “friend of the court” briefs — were filed ahead of the hearing.