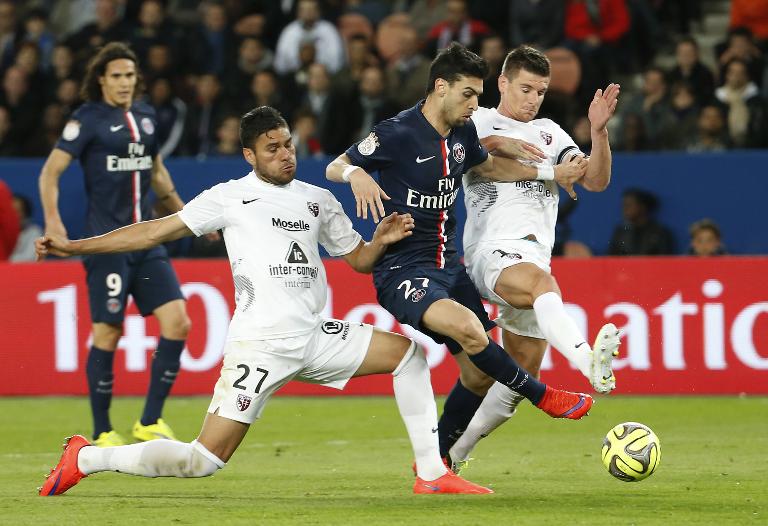 A standout performance by Argentinian Javier Pastore inspired Paris Saint Germain to a 3-1 win over relegation-threatened Metz on Tuesday and saw the winners open a three point lead at the top of Ligue 1.

Pastore, one of three players pin-pointed as not going anywhere in the close season by club president Nasser Al-Khelaifi in an interview in Tuesday’s Le Parisien, was in devastating form, setting up all three PSG goals for Marco Verratti, Edinson Cavani and Gregory van der Wiel.

The win gives the two-time defending champions a three point cushion over Lyon, who have a slightly better goal difference with four matches remaining.

Metz by contrast saw a four match unbeaten run come to an end and are still without an away win since September — they lie second bottom, eight points from safety and just 12 still in play.

PSG coach Laurent Blanc, who also received the thumbs-up from Al-Khelaifi in the interview, said his players were handling the incessant run of games very well.

“One forgets often that Paris has been on the go non stop for the past two months,” said Blanc, whose side could seal a domestic treble this season having won the League Cup and a date with second tier Auxerre in the French Cup final.

“However, it gives me joy as a coach to see like this evening players who are determined, who battle for every ball, who betray few weaknesses.”

Blanc, who saw his side’s hopes of the Champions League ended by Barcelona last week in the quarter-finals, said that the result was not a title winning one.

“It is not an essential step towards the title,” said the former France national coach, whose contract was not renewed after the Euro 2012 finals.

“There are still four matches remaining and we have to take a lot of points. We are in a good place but that is not enough.”

Verratti struck with a sweetly-taken right-footed effort, after being set up by Pastore.

The 25-year-old was at the heart of the second goal as well, finding Cavani, who had started the move, with a deft pass and the Uruguayan, along with Zlatan Ibrahimovic who was serving the last match of his suspension the other two players named as not for sale, made no mistake.

Metz, though, refused to lay down and got back into the game seven minutes into the second-half as Bouna Sarr outstripped David Luiz down the right flank and the 23-year-old’s cross beat Thiago Silva and was met with full force by on-loan striker Modibo Maiga’s head giving goalkeeper Nicolas Douchez no chance.

However, the hosts wrapped up the points 13 minutes from time as the dynamic Pastore picked out van der Wiel’s run down the right hand side and the Dutch international defender’s shot crept under Metz goalkeeper Anthony Mfa Mezui.

“He is a player I value highly,” said Blanc.

“He had a difficult time earlier in the season but in the last 10-12 matches he has come through especially in the absence of Ibrahimovic.

“This evening he could have been better as he lacked lucidity on occasions, but I think that could be down to fatigue.”