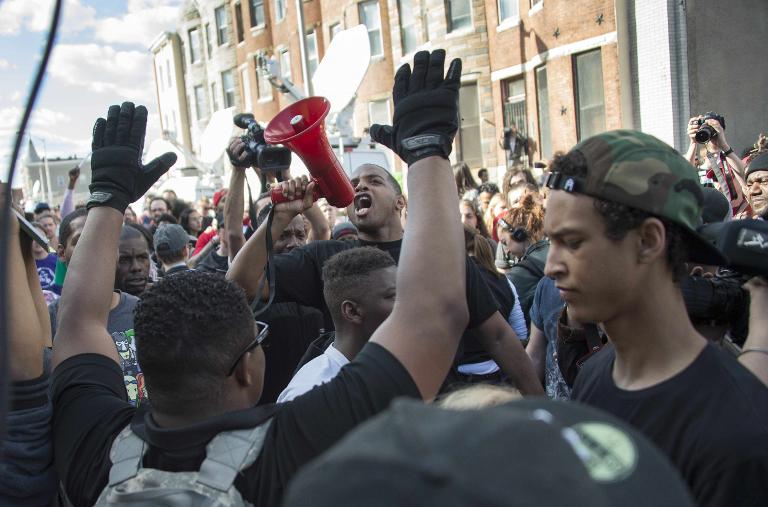 A nighttime curfew Tuesday restored a semblance of order to badly scarred Baltimore a day after riots dragged it into the national debate over how US police treat young black men.

Police did fire smoke bombs and pepper pellets at protesters who defied the citywide clear-the-streets order starting at 10:00 pm.

And protesters threw bottles and other projectiles at a line of riot police protecting themselves with shields.

But the scene was a far cry from the spasm of rioting and looting Monday in which roving gangs of youths torched buildings and cars and ransacked shops in poor areas of the northeastern American city of 620,000 beset with high unemployment and pockets of severe poverty.

“The curfew is in fact working. Citizens are safe. The city is stable,” Police Commissioner Anthony Batts told a midnight news conference.

A total of 10 people were arrested, seven of them for curfew violation, he added. That compared to more than 250 on Monday.

After midnight, after tear gas clouds forced protesters to disperse, the streets were largely clear of protesters.

TV footage showed that one intersection that was ground zero of Monday’s mayhem was deserted but for police and other security forces.

Nervous authorities imposed the emergency night-time curfew at 10:00 pm (0200 GMT Wednesday) in a bid to stave off more violence.

But several hundred protesters initially refused to clear the tense streets on Tuesday according to TV estimates, and a fire was started near a library.

A line of heavily equipped riot police moved on the crowd of mainly young, black men, who lobbed back whatever they could get their hands on.

Police responded with pepper pellets and fired smoke bombs, and appeared to have quickly and successfully dispersed the crowd.

Armored police vehicles moved in to help enforce the curfew, which was to be lifted at 5:00 am Wednesday and then re-imposed each night for a week.

National Guard troops were deployed to back up police in the gritty port city where the violence and looting erupted on Monday after the funeral of 25-year-old African-American man Freddie Gray, who died after suffering severe spinal injuries during an arrest earlier this month.

Earlier in the day, President Barack Obama condemned Monday’s rioting. But he warned that incidents in recent months “raise troubling questions” about the policing of black communities in the United States.

“Since Ferguson… we have seen too many instances of what appears to be police officers interacting with individuals — primarily African American, often poor — in ways that raise troubling questions,” the president said.

“I think there are police departments that have to do some soul-searching,” added Obama, the first black president of the United States.

Thousands of military and police reinforcements took up positions on the streets of Baltimore Tuesday after a night of unrest saw stores looted, more than 140 vehicles burned, 20 police wounded and more than 250 suspects arrested.

Maryland Governor Larry Hogan inspected a National Guard barricade and vowed to “make sure what happened last night in Baltimore City is not going to happen again.”

“Tonight (Tuesday) we will have 2,000 National Guardsmen and over one thousand law enforcement officers on duty,” Hogan later told reporters.

The initial trigger for the violence came after a dignified service for Gray, who died a week after his spine was all but severed as he was detained by city police.

An investigation has been launched into the cause of his injuries, but many see the incident as only the latest example of police brutality against young black suspects.

Six officers have been suspended.

Volunteer clean-up teams hit the streets Tuesday and residents spoke of their terror after gangs roamed the streets fighting police and destroying property.

“It was horrific to the point where my children were actually crying, trying to get back to the house, because there was so much going on,” Latania Graham, a Baltimore resident, told AFP.

Many condemned the rioters, but also spoke of their distrust of police.

Department store clerk and Baltimore native Aretha Williams, 45, speaking in front of a line of mostly white police officers in riot gear, said: “I think that a lot of the police are racist… they get a license to kill by becoming a police officer.”

A 68-year-old retiree who gave his name as Clarence said he hadn’t seen Baltimore so tense since the riots of 1968, when six people were killed, 700 injured and much of the downtown area razed.

“The police brutality. That’s sad. You have a man handcuffed. You don’t beat him,” he said. “You’ve got some good ones out there. But it seems like it’s getting worse.”