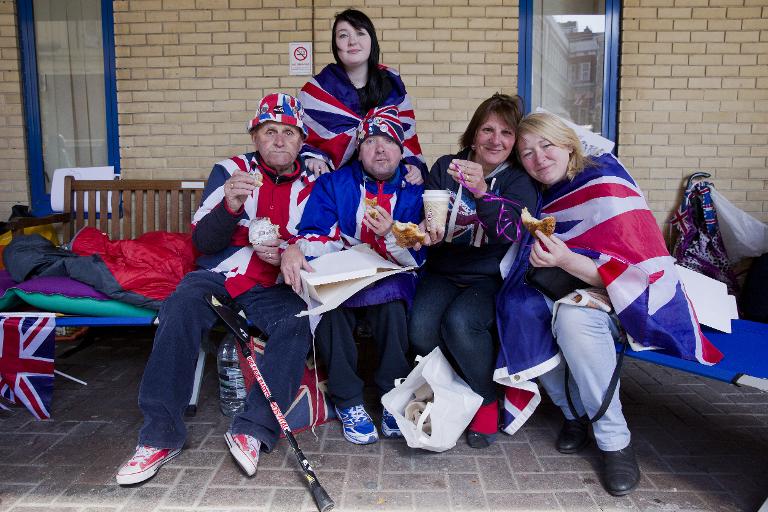 Prince William and his pregnant wife Kate sent pastries on Tuesday to a camp of royal watchers waiting outside a London hospital for the birth of their second child.

“We’re getting close,” said Kathy Martin, 50, one of around a dozen of royalist faithful decked out in the colours of the Union Jack flag who have slept outside the London hospital for a week in tents and on benches.

Martin was delighted at the box of croissants and apple turnovers from Kensington Palace — William and Kate’s official residence in the British capital.

“They must have seen in the news that we are camping here for a week now in the cold, and it is really cold, I can tell you that,” she said.

“It shows how nice those people are. The box was wrapped in pink ribbons. It could be a sign they are having a girl,” she told AFP.

“Some say we’re idiots or freaks and that the monarchy does nothing for us but we don’t believe that,” she said.

A royal source said: “The Duke and Duchess had seen them on the news reports and wanted to let them know they were thinking of them by sending some breakfast”.

The royal family has not said whether the baby, who will be fourth in line to the throne, will be a boy or a girl and has not revealed the due date.

The Daily Telegraph has reported that the baby was due last week and that the birth would probably have to be induced some time this week.

One fan, John Loughrey, said he was sure the baby would be born on Wednesday because it was William and Kate’s fourth wedding anniversary, but fellow camper Terry Hutt predicted it would be on Thursday.