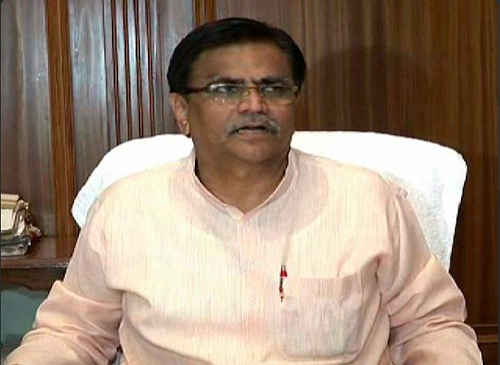 Chandigarh:Â Even as the farmer suicide issue continues to hog national attention,Â HaryanaÂ Agriculture MinisterÂ OP DhankarÂ sparked a controversy after he termed farmersÂ who commit suicideÂ as ‘cowards’ and said that they will not get the government’s support.

The minister’s shocking statement comes days after the death of Gajender Singh, a farmer from Rajasthan who had committed suicide at an Aam Aadmi Party rally.

Speaking to reporters,Â Dhankar had said, “A person who commits suicide runs away from his responsibilities, andÂ Haryana government will not help families of such (farmers) cowards or criminals.â€

Dhankar made it clear that Haryana government will not help families of those farmers and agricultural labourers who have committed suicide because the administration is not for cowards.

This is not for the first timeÂ OP DhankarÂ has made controversial statement.

Earlier, in a speech ahead of the assembly polls last year,Â DhankarÂ had promised the youth thatÂ he will bring brides fromÂ BiharÂ for them if they are unable to find a matchÂ in a state infamous for its skewed sex ratio.

Dhankar, who earlier headed the Bharatiya Janata Party Kisan Cell, used to condemn the earlier UPA government for not doing much for farmers which was leading to increasing suicides.

The Congress slammed the Minister’s “insensitive” remarks and demanded that he be sacked. The issue also echoed in Parliament with Congress Vice President Rahul Gandhi citing it to attack the ruling BJP.Â

“Your minister in Haryana now says that farmers who commit suicide are cowards. You did not help them when their crops were affected by hailstorm, the farmers bore it. You ended their bonus, they bore it. You did not give them fertilisers, they were lathicharged, but they bore it and now their produce is lying in the markets,” Gandhi said in Lok Sabha.Â

Attacking Manohar Lal Khattar government, Haryana Congress President Ashok Tanwar said, “This shows the insensitive mindset of the BJP Government towards the farmers. Will the Khattar government wake up from its deep slumber or will it wait till more farmers end their lives.”Â

Despite the uproar, Dhankar defended his remarks saying the the issue of farmer suicides was “hype” and “motivated”.Â
Â