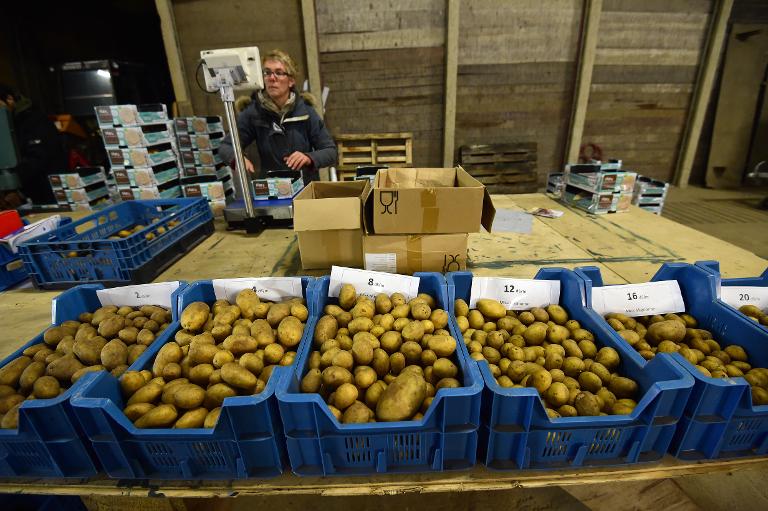 A small field on an island off the Netherlands’ northern coast promises one answer to the problem of how to feed the world’s ever-growing population: potatoes and other crops that grow in saltwater.

Every day, swathes of farmland somewhere in the world become unusable because of salty soil, but farmers on windswept Texel are finding solutions using traditional methods.

The experiments do not just target potatoes, but also look at how other crops grow in saltwater, including carrots, strawberries, onions and lettuce.

The plants are irrigated using pumps that manage water down to the drop, so the plant and soil salinity can be accurately measured and the effect of “sweet” rainwater taken into account.

Van Rijsselberghe, 60, started the “Salty Potato Farm” around 10 years ago in the hope of helping the world’s malnourished.

The team, supported by Amsterdam University, uses neither genetically modified organisms nor laboratories in their quest for food that grows in salty environments.

With more than 5,000 varieties, the potato is the world’s fourth most popular food crop, according to the United Nations’ Food and Agricultural Organisation (FAO).

Plants whose ancestors grew near or on the sea, but have moved inland with human populations, are likely still to have the necessary genes.

“It could be a hundred, it could be 1,000 years ago, they still are capable of coping with saline surroundings,” said Van Rijsselberghe.

While today much research is focused on improving the yield of crops, the Dutch team has taken the opposite approach: trying to grow crops on land previously considered unusable.

The bespectacled farmer jokes that in a country where much of the land lies below sea level, “we are so afraid of the sea that until 10 years ago we didn’t dare to do anything with sea water and growing plants”.

The world loses around 2,000 hectares (just under 5,000 acres) of agricultural land a day to salt-induced degradation in 75 countries, caused by bad or absent irrigation, according to the UN’s Institute for Water, Environment and Health.

Solutions to make the land cultivable once more are too expensive for most of the areas, including the basin of the Yellow River in China, the Euphrates in Syria and Iraq or the Indus Valley in Pakistan.

The Team on Texel has already sent thousands of its potatoes to Pakistan where they were “successful”, said Van Rijsselberghe, who will send more plants next year.

These “salt” potatoes could transform the lives of thousands of farmers in affected regions and, in the long term, those of around 250 million people who live on salt-afflicted soil.

The potato was introduced to Europe from Peru in the 16th century and became popular because of its ability to feed people during the continent’s frequent famines.

However, over-reliance on the crop was potentially disastrous, with a blight leading to the devastating 19th-century Irish potato famine.

Today, about 800 million people in the world are under-nourished, according to the FAO, with salt degradation threatening 10 percent of the global cereal crop.

The potatoes grown here taste sweeter than those grown on normal land, because the plant produces more sugars to compensate for the salty environment.

The salt absorbed by the plant stays in the leaves, not in the flesh.

But the price of the potatoes is for now prohibitive, with one kilo (around two pounds) selling for five euros (just over $5), compared to less than a euro for the same amount of “normal” potatoes.

“We grow around 30,000 kilos per hectare, a farmer with good conditions around 60,000 kilos,” said Robin Konijn, the farm’s financial director.

Countries ranging from Egypt to Bangladesh and India have already asked for advice on planting their own salt-proof crops.

The team is also soon to start trying to cultivate potatoes in the salty wetlands of the Camargue in the south of France — the so-called “Miss Mignon” (French for “Miss Cutie Pie”).