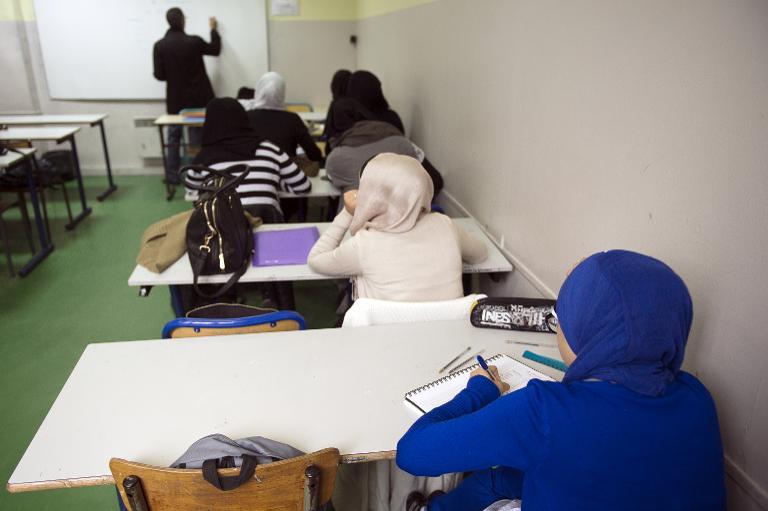 Is a long, black skirt a “conspicuous” sign of Islam? Or is that pushing France’s strict secularity laws a little too far?

The outrage over the case of a Muslim girl who was twice banned from class for wearing the offending piece of clothing highlights the headache teachers face in interpreting France’s treasured ban on religion school, experts and officials say.

The country has a long-established secular tradition that has its roots in the anti-clericalism of the French revolution and a 1905 law enforcing a strict separation between church and state.

In 2004, spooked that the growing number of Muslim girls wearing headscarves in public schools was eroding this separation, the government brought in a controversial secularity law that banned students from wearing “conspicuous” signs of religion such as veils, Jewish skullcaps or crucifixes.

But the 15-year-old girl was stopped from going to class earlier this month for wearing a long skirt — popular among some Muslim women who cover their whole body — which the head teacher decided “conspicuously” showed her religious affiliation as part of a concerted, protest action.

Her story caused an outrage, fuelled by the fact that she always removed her veil before entering school premises in the northeastern town of Charleville-Mezieres, as is specifically stipulated by law.

On Twitter, the hashtag #JePorteMaJupeCommeJeVeux, translated into English as “I wear my skirt as I please,” was trending on Tuesday.

“The girl was not excluded, she was asked to come back with a neutral outfit and it seems her father did not want the student to come back to school,” local education official Patrice Dutot told AFP on Tuesday.

According to the CCIF Islamophobia watchdog, some 130 students were kicked out of class last year for outfits deemed too openly religious.

Nicolas Cadene, the prime minister’s special advisor on secularity, cautioned that this was a rare occurrence but said the move in Charleville-Mezieres was a “bad interpretation of the law.”

To make matters more complicated, a letter sent to all education personnel explaining how to apply the law allows for some exceptions, such as when a student attaches religious significance to an accessory or outfit he or she wears regularly.

As a result, as a local education authority near Charleville-Mezieres explained on Tuesday, “it is sometimes difficult to distinguish between simply wearing a conspicuous religious sign, provocation or temptation to test the limits of common rules.”

Cadene said that while the individual behaviour of students had to be taken into account to decide whether they were deliberately provoking authorities, it would be “counter-productive” to set up “clothing police.”

Sociologist Jean Bauberot, who took part in a commission of experts debating secularity ahead of the 2004 law, said he and other members at the time had warned that any accessory or outfit could eventually be given religious significance.

“We risked entering a stupid cat and mouse game, constantly suspecting the students,” he said.

So they decided to make a list of conspicuous religious signs that was included in the letter sent to education personnel.

But he said the issue had become “an obsession” with some school authorities that risks encouraging teenagers “to revolt and spark the feeling that they are persecuted and victims of injustice.

“If we wanted young people to be attracted by extremism, we couldn’t do better than this.

“And if we chase down young girls who have long skirts, their parents will put them in private school,” he added.

“We’re turning our backs completely on the calling of state schools, which is to welcome a lot of children.”