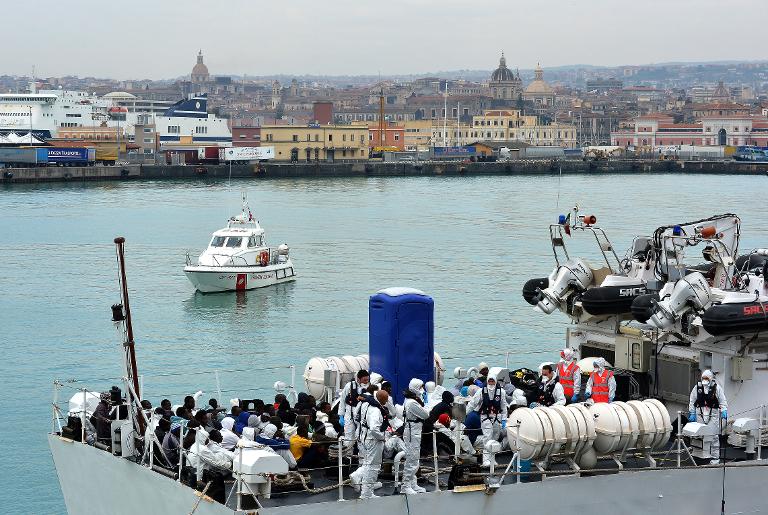 The event comes just over a week after more than 750 people drowned in the Mediterranean’s worst migrant shipwreck.

A UN Twitter account also posted images showing Ban, Mogherini and Renzi talking as they made their way to the vessel.

The leaders aim to “assess the situation and help ensure European solidarity for the efforts undertaken to save the lives of migrants crossing the Mediterranean Sea”, the EU said in a statement on Saturday.

The visit is part of a string of meetings that Mogherini has planned, citing “the need for a common effort to address the issue of migration, from tackling root causes to facing the emergencies”.

The trip takes place eight days after a shipwreck off the Libyan coast killed over 750 people fleeing war and poverty as they tried, like thousands more, to reach Europe.

On Monday, a Italian navy ship reached the southern port of Taranto with 274 migrants on board after they were rescued at sea.

Under pressure to deal with a spike in the number of migrants undertaking the perilous journey to Europe, EU leaders held emergency talks on Thursday and decided to triple funding for the bloc’s maritime surveillance operation.

Britain and France are set to demand a UN Security Council resolution to take action in Libyan territorial waters.

Mogherini on Sunday said it would not be easy for the EU to secure a UN mandate, or the approval of the Libyan authorities, which have not yet formed a unity government.

A staunch proponent for military action against smugglers, Renzi has branded them “the slave traders of the 21st century”.

However, Ban has urged the EU to refrain from resorting to force, saying there could be “no military solution” to the tragedies in the Mediterranean.

“What is crucial is to have a global approach that takes into account the roots of the problem, the security and human rights of migrants and refugees, such as having immigration channels that are legal and regular,” Ban said in an interview with Italy’s La Stampa daily.

Rights groups have repeatedly warned that migrants are aware of the deadly risks involved in travelling across the Mediterranean on rickety boats, but that their desperation to flee war and poverty pushes them to make the journey anyway.

Mogherini will travel to the UN headquarters in New York on Tuesday and meet with US Secretary of State John Kerry in Washington on Wednesday.

Aid groups predict that if the migrant crisis continues unabated, there could be 30,000 deaths at sea this year and Italy will have to process 200,000 migrants landing in flimsy boats on its soil.

Italy’s shelters have become home to 80,000 people. Interior Minister Angelino Alfano has called for talks with the country’s local officials in Rome on May 7, to find ways to tackle the crisis.