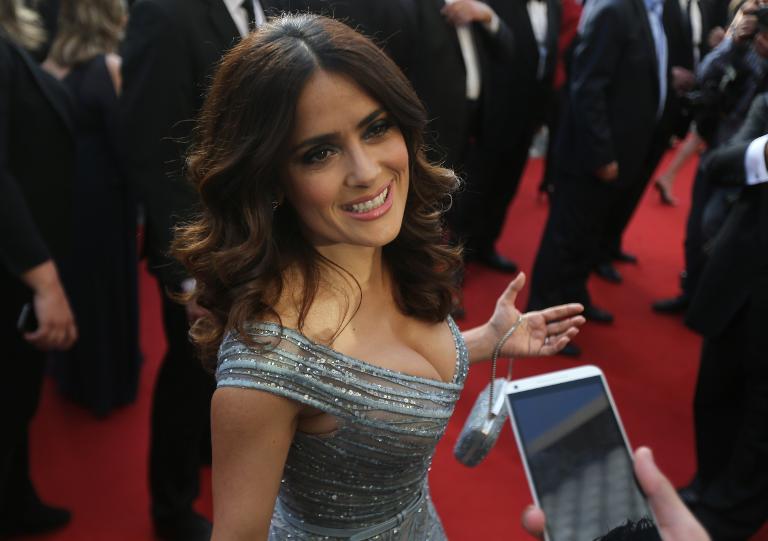 Hollywood star Salma Hayek, in her ancestral homeland Lebanon for the first time, launched the global premiere of her animated adaptation of Kahlil Gibran’s celebrated novel “The Prophet” on Monday.

The Mexican actress and director described the movie version of the Lebanese author’s spiritually-uplifting book as a “love letter to my heritage”.

She said the adaptation, which features an all-star cast, was a “personal film” because her Lebanese grandfather loved The Prophet.

The Prophet, now in its 163rd edition, is widely considered the second most-read book in the world, after the Bible.

The movie adaptation, screened in Beirut on Monday evening, features the voices of Hayek, along with actors Liam Neeson, Alfred Molina and Frank Langella.

A collection of poems and prose, originally written in English, The Prophet has been translated into more than 40 languages since its first publication in 1923.

It tells the story of Almustafa, who before returning to his homeland, speaks to residents of the city of Orphalese about different aspects of life — love, work, children, friendship and death.

The movie is entirely animated, with dream-like fantasy sequences as Almustafa — called simply Mustafa in the film — shares his wisdom before being expelled by authorities because of his rebellious poetry.

Divided into 26 chapters, verses from “The Prophet” are often quoted at births, weddings and funerals around the world.

“Your children are not your children, they come through you but not from you,” one popular line reads.

“When love beckons to you, follow him, though his ways are hard and steep,” reads another, a regular at weddings.

Gibran wrote most of his books in the United States, where he headed the New York Pen League, the first Arab-American literary society, although he was born in Lebanon under Ottoman rule.

Hayek said visiting Lebanon had allowed her to realise an “old dream” of visiting the birthplace of Gibran, the country’s most famous writer.

She said she hoped her adaptation of the book would demonstrate “to the world that there is an Arabic writer who wrote philosophy and poetry, who brought all religions and all the world together, and has sold more than 100 million copies around the world for many generations.”

“We wanted to do (him) justice, we want the world to remember” him.

Despite his popularity among readers, Gibran’s most famous work received a lukewarm reception at the time of writing from American critics, who criticised it as simplistic and moralising.

It will begin screening publicly in Lebanon from April 30, and in the United States during the summer.

Hayek said the adaptation was animated in a bid to better convey Gibran’s message to a younger generation, with the script produced by Roger Allers, who directed Disney’s “The Lion King”.

The film is scored by French-Lebanese composer Gabriel Yared, who worked on “The English Patient”.

Hayek also acknowledged the region’s ongoing political turmoil during her visit to Lebanon, meeting with some of the nearly 1.2 million Syrian refugees living in the country.

“I was very moved by many of the stories. There was a girl, for example, because of the traumas she was paralysed, and she was able to walk with me yesterday thanks to the psychological aid,” she told AFP.

“I was deeply moved by their courage and their hope.”

Hayek said the whole trip to Lebanon had been full of emotion.

“There are too many things that are emotional, from reconnecting with my roots and being able to see the house of my family… to the love of the people, to the refugee camp, to the kids with cancer that I went to see today, to the reaction of the people after seeing the movie,” she said.

In tribute to Gibran, her visit also included a stop in his hometown of Bsharre, where the writer was buried after he died in 1931, aged just 48, of tuberculosis.