Home Politics Pretty in pink: Is Hyderabad blushing or fuming? 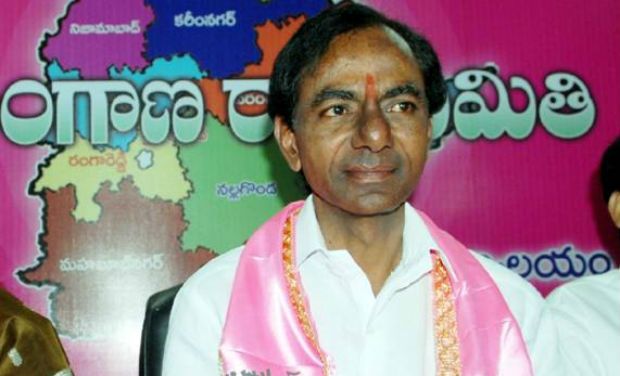 Hyderabad: Telangana Rashtra Samithi (TRS) is name thatâ€™s as loved in Telangana as the much-awaited state itself is. Itâ€™s the founding day of the party and one can get a sense without even having the knowledge.

The streets of Hyderabad were decked up in pink, marking the very essence of a party that made the T dreams come true. As the state gears up to celebrate the day this revolution was conceived, Hyderabad is blushing, literally, thanks to the pamphlets and little decorative pink papers that grace the streets.

Itâ€™s a party thatâ€™s delivered what it promised — a separate state. However, even many of its loyal fans are now questioning some of the decisions that have been taken, especially with regards to the way the foundation day is being celebrated.

The streets are clogged, far from celebrating any foundation day, people look grimaced. Thereâ€™s heavy honking, and instead of singing the glory of a party much loved, people are swearing at the traffic, at the party leaders and at the decision of choosing the heart of the twin-cities — Parade Grounds in Secunderabad — to organise day-long celebrations.

Sahit Reddy said, â€œ My brother spent almost four hours in traffic and he was talking about how foul words were used by fellow travelers on Telangana Rashtra Samiti chief K Chandrashekar Rao (KCR) and TRS. Hope they will not make this mistake again which causes such inconvenience to the common man. Even though itâ€™s a joyous day, they should choose their place of celebration wisely.â€

There are many who foresaw this. There were many who posted on their facebook timelines, warning about traffic snarls that would be a constant, avoid these roads to make your day less longer. Srinivas Malleti was stranded on the streets.

â€œI spent three hours travelling 8 kilometres and spent Rs 300 as auto fare. Public meetings on working day in heart of the city was not a great decision.â€

For others, itâ€™s about whoâ€™s money is being used to stage this show. While many believe that TRS played a key role in carving out the Telangana state, yet theyâ€™re in no hurry to forgive anyone, absolutely anyone who misuses public money.

Overall, even though there are several sentiments attached to TRSâ€™ foundation day, and Hyderabad is soaking up the pink, yet there were many loopholes left which inconvenienced the local people. The decorative pink stuff laid across the roads for several kilometres, for instance, is made of plastic, which, once the celebrations are over, will be dumped somewhere, ultimately finding its way to the drainage system and clogging it at the slightest pretext of a monsoon.Â
Celebrations are good, but only when theyâ€™re well-planned.