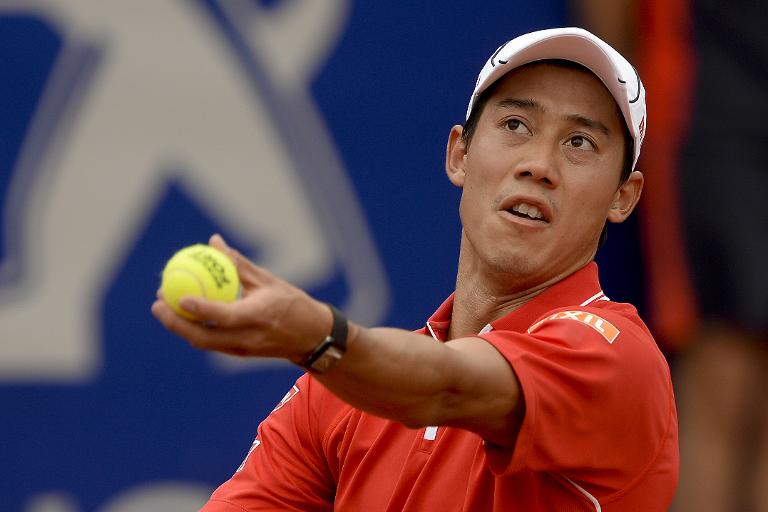 Japan’s Kei Nishikori has the ability to reach the summit of men’s tennis and is technically already better than world number one Novak Djokovic, according to his former mentor.

Shuzo Matsuoka told AFP on Tuesday it was “only a matter of time” before Nishikori, who broke into the top five last season, captured his first Grand Slam title.

“Kei is hitting the ball harder and controlling opponents more than last year,” Matsuoka said in an interview.

“He has a decent chance of winning the French Open. He’s knocking on the door, for certain. I’m not being biased but he plays better tennis than Djokovic or (Rafa) Nadal.”

Matsuoka, who has watched Nishikori develop since first encountering him as a shy 11-year-old, added: “That said, he knows there are still questions over his mental strength and that tennis is about more than just pure talent.

“Seeing Kei dominating on clay puts him right behind Djokovic in terms of who you would fancy to win right now. I don’t think anyone would write off his chances at the French Open. He has a good shot.”

Nishikori, 25, who retained his Barcelona title at the weekend to capture a ninth career tournament, learnt a harsh lesson after being floored by Croatian Marin Cilic in last year’s US Open final, insisted Matsuoka.

“He had never reached a Grand Slam final before and he felt the pressure for sure,” said Matsuoka, who in 1992 became the first Japanese player to win an ATP title. “But it’s only a matter of time before Kei wins a Grand Slam. If he wins one, he could go on to win a bunch.”

Matsuoka believes that Nishikori has nothing to fear from the so-called big four of men’s tennis — Djokovic, Nadal, Roger Federer and Andy Murray.

“Murray had it incredibly tough,” said Matsuoka, referring to the Scot’s agonising wait for a first major title. “He was coming up against the other three at their absolute peak. But their powers are fading a little now, without a doubt, and a new generation of players are on the rise.

“Clearly, Kei can beat those players and this year he has a bigger chance of winning a slam than last. In the next two or three years, as long as he stays fit, he will break through.”

Nishikori burst onto the scene as an 18-year-old by winning in Delray Beach as a 244th-ranked qualifier in 2008. He has become a huge celebrity in Japan, with millions waking up early to watch his matches on television during his run to the US Open final.

Despite his recent success, Nishikori’s career has been plagued by injuries, most notably in 2009 when he needed elbow surgery and feared he might not play again.

“He’s tougher now,” said Matsuoka. “And he can also play mind games if he has too. He is very adept at reading his opponents and out-psyching them. He can lull you into thinking he’s down and out — and then hit back and knock you out in the fifth set.

“For me there are two true geniuses in the game — Federer and Kei,” added Matsuoka. “Their touch, their creativity. Kei still has to win a Grand Slam but he is playing super tennis and can smash that wall down.”