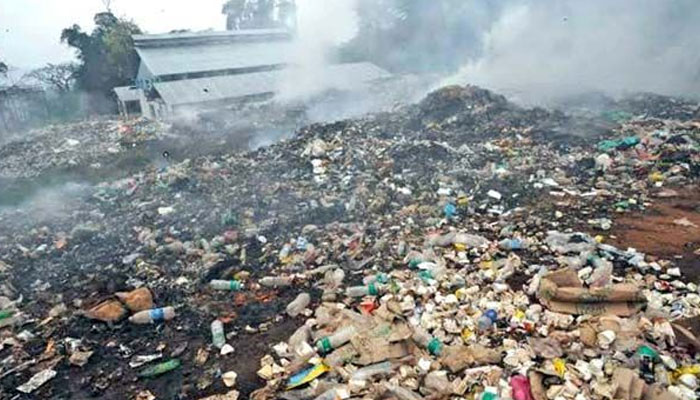 New Delhi: Imposing a complete ban on burning of waste in open including garbage, leaves, plastic and crop residues, the National Green Tribunal on Tuesday said violators will be fined Rs 5,000, in yet another significant order to tackle air pollution in Delhi-NCR.

The order comes three weeks after the Tribunal banned plying of diesel vehicles which were more than 10 years old in the region.

A bench headed by NGT Chairperson Justice Swatanter Kumar passed a slew of directions, including asking the civic authorities and state governments of Delhi, Haryana, Rajasthan and Uttar Pradesh to â€œimmediatelyâ€ spread mass awareness regarding ill-effects of burning waste materials in open areas.

Â â€œThere shall be complete prohibition on burning of any kind of garbage, leaves, waste, plastic, rubber or any such other materials in open areas for any part of NCR-Delhi,â€ it said.

PM or Particulate matter refers to all solid and liquid particles suspended in air many of which are hazardous. They are differentiated on the basis of their size.

Elaborating on the process for filing complaints, it said â€œany person who notices burning of such material would have a right to complain in writing or otherwise to SHO of concerned area, concerned Municipal Corporation, Delhi Pollution Control Committee (DPCC) and its regional branches and to the heads of the concerned departments.â€

â€œWe direct that for every incident of burning of such material, the person who is actually found burning or responsible for burning would be liable to pay compensation in terms of Section 15 of the National Green Tribunal Act, 2010 under the principle of polluter pays,â€ the bench said adding that the money collected would be used for restoration of environment.

The green panel said that in case an offender refuses to comply with the orders, the officer-in-charge would be at liberty to serve show cause notice to him for appearing before the Tribunal and explain why he shall not pay compensation.

It made it clear that orders of NGT are to be complied with as a decree order of a civil court and all authorities including the police are duty bound to carry them out.