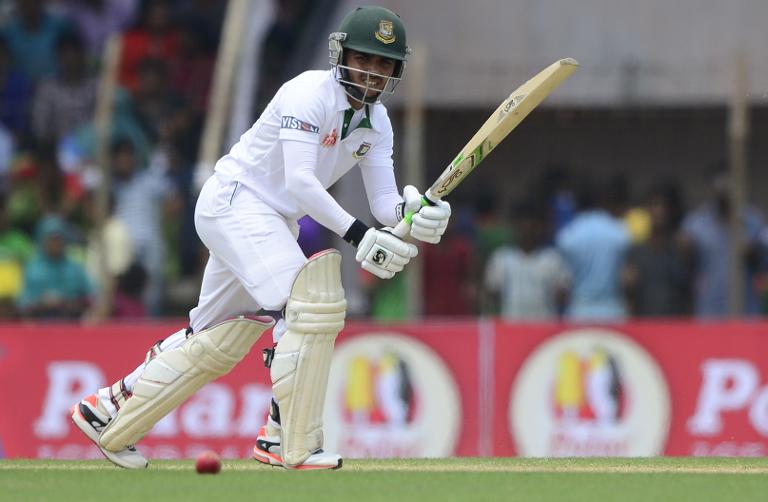 Mominul Haque scored 80 as Bangladesh made an impressive start in the first Test against Pakistan in Khulna on Tuesday, reaching 236 for four by stumps on the opening day.

The talented 23-year-old left-hander batted fluently to pass 50 for the 12th time in his first 13 Tests before being trapped leg-before by Zulfiqar Babar off the last ball of the day.

Opener Imrul Kayes made 51, Mohammad Mahmudullah scored 49 and Shakib Al Hasan was unbeaten on 19 after the hosts elected to take first strike in good batting conditions at the Sheikh Abu Naser Stadium.

Mominul has scored a half-century or more in his last 10 Tests. Only four batsmen — Viv Richards of the West Indies, South Africa’s AB de Villiers and the Indian duo of Gautam Gambhir and Virender Sehwag — have scored more 50s in consecutive Test matches.

“I think we are in a good position, but if I had not been out we would have been on top,” Mominul said after the dayâ€™s play. “Surviving here is easy, but scoring runs is difficult.”

Mominul put on 40 for the second wicket with Imrul, 95 for the third with Mahmudullah and 49 for the fourth with Shakib as Pakistan’s bowlers toiled for success on an unhelpful pitch.

The most expensive let-off was by Zulfiqar, who spilled a simple return catch when Mominul was on 17.

Yasir broke a 52-run opening stand between Tamim Iqbal and Imrul just before lunch by having Tamim (25) caught at forward short-leg by Azhar Ali.

Yasir, who had missed the preceding limited-overs series due to injury, ended the day with figures of one for 58 in 18 overs.

Imrul survived a strong leg-before appeal off the third ball of the innings from Junaid Khan as the TV umpire turned down Pakistan’s review.

Hafeez, who dropped Tamim at leg slip off Zulfiqar when he was on 16, made amends by taking a return catch to dismiss Imrul after lunch.

Pakistan had to wait for almost two hours for their next success, which came after tea when wicket-keeper Sarfraz Ahmed dived to his right to remove Mahmudullah off Wahab’s bowling.

Azhar, who led Pakistan in the one-dayers before making way for Misbah-ul Haq in the Tests, said the day’s honours were shared after the dismissal of Mominul in the last over.

“Obviously after picking Mominul’s wicket we are happy,” he said. “It has raised the team’s spirits and hopefully we can dismiss them early tomorrow.”

The hosts swept the ODI series 3-0 and also defeated Pakistan for the first time in a Twenty20 international.