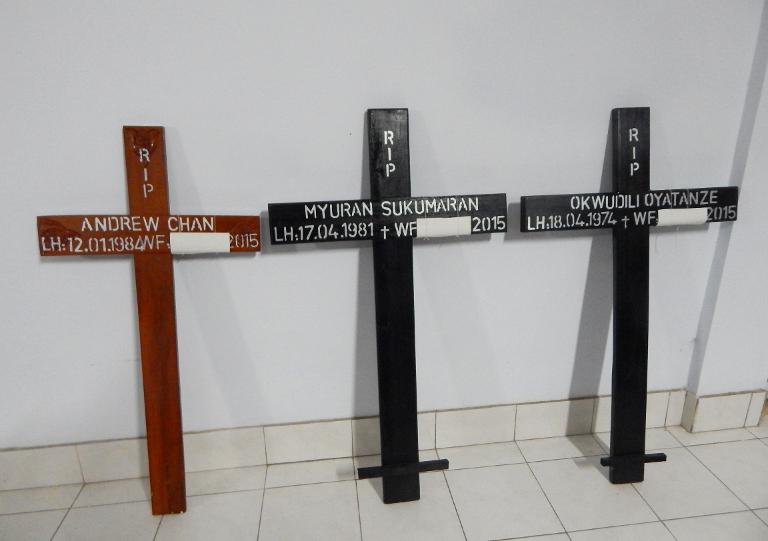 Indonesia made final preparations Tuesday to execute eight foreigners by firing squad, as family members wailed in grief during last visits to their loved ones and ambulances carrying white coffins arrived at the drug convicts’ prison.

Relatives of Myuran Sukumaran and Andrew Chan, the Australian ringleaders of the so-called “Bali Nine” heroin trafficking group, arrived at Nusakambangan prison calling for mercy for their loved ones, with Sukumaran’s sister collapsing in grief.

They are among nine prisoners, including nationals from Brazil, the Philippines, Nigeria, and one Indonesian, facing imminent execution after authorities gave them final notice.

Officials must give a minimum 72 hours notice to convicts facing execution, and as they were notified on Saturday, speculation is mounting they will be put to death early Wednesday.

Executions are traditionally carried out just after midnight in Indonesia by a 12-man firing squad, with the condemned prisoner led to a clearing and tied to a post.

The convicts’ relatives have been told to say their final farewells on Tuesday and Australian media have published photos of crosses that will be used for the coffins, inscribed with Wednesday’s date, 29.04.2015.

President Joko Widodo, who believes Indonesia is facing an emergency due to rising drugs use, has signalled his determination to push on with the executions despite mounting international condemnation led by UN Secretary General Ban Ki-moon.

Families were originally told to say their final farewells by 2:00 pm (0700 GMT) on Tuesday, but the attorney-general’s office later said they had been given a few extra hours, until 8:00 pm.

The families of Chan and Sukumaran, who have been visiting them frequently in recent days, were unable to control their emotions as they arrived at Cilacap, the town that serves as the gateway to Nusakambangan.

As they were mobbed by a huge scrum of journalists, members of Sukumaran’s family screamed and cried out “mercy” as they walked in a slow procession to the port.

His sister Brintha wailed and called out her brother’s name, collapsing into the arms of family members who had to carry her.

Chan, who like Sukumaran is in his 30s, married his Indonesian girlfriend in a jailhouse ceremony with family and friends on Nusakambangan on Monday, his final wish.

Todung Mulya Lubis, a lawyer for the Australians, returned from Nusakambangan with paintings by Sukumaran, an accomplished artist, including one signed by all nine death row convicts as they counted down their final hours.

The painting — entitled “One Heart, One Feeling, One Love” — depicts a heart in bold colours.

“Jesus always love us until in the eternal life,” wrote Filipina prisoner Mary Jane Veloso, signed with a heart and with the words “keep smile” below the message.

The family of Veloso, who was convicted for trying to smuggle heroin into Indonesia but claims she was duped by international drug syndicates, also arrived in Cilacap en route to Nusakambangan to pay a final visit, racing past waiting reporters in a van.

As they got out of the vehicle, Filipino priest Father Harold Toledano gave them each a blessing before they headed to the island. Among the group were Veloso’s two sons, aged six and 12.

Australia has mounted a vigorous campaign to save its citizens, who have been on death row for almost a decade.

Foreign Minister Julie Bishop said Monday the executions should be halted until a corruption investigation into judges who presided over the case is complete, but Widodo dismissed the request.

Veloso’s case has attracted huge attention in her native Philippines, and the country’s President Benigno Aquino on Monday asked Widodo on the sidelines of a summit to grant her clemency. However, Attorney-General Muhammad Prasetyo said Tuesday her execution would go ahead.

Protesters gathered outside the Indonesian embassy in Manila, where they have been holding regular candlelight vigils for Veloso, calling on Widodo to change his mind.