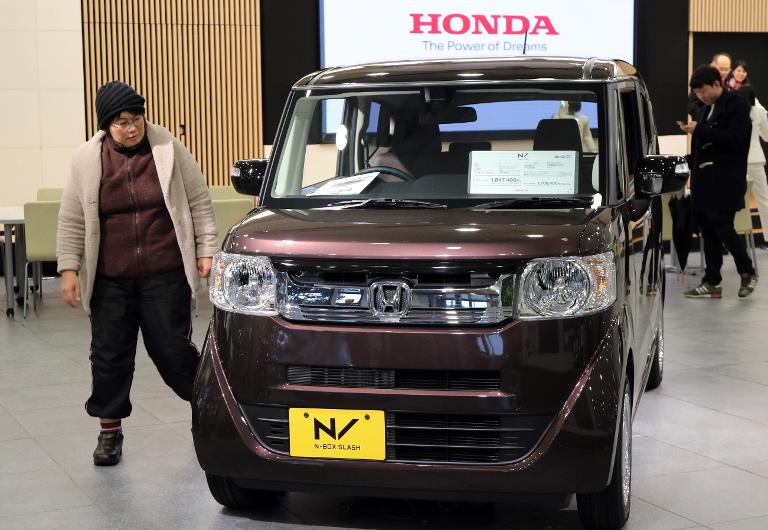 The Civic maker downgraded its profit forecasts twice before the results were published Tuesday, as it warned the airbag scandal at supplier Takata would take a toll on its bottom line, as well as falling demand in Japan and the world’s biggest vehicle market, China.

The company said it earned 522.7 billion yen ($4.4 billion) in the year through March — worse than its most recent estimate of a 545 billion yen profit and missing analyst expectations — while operating profit dropped 13 percent to 651.6 billion yen.

For the current fiscal year, Honda forecast a net profit of 525 billion yen on sales of 14.5 trillion yen, under a new system of accounting standards the carmaker has adopted.

The company said its fiscal fourth-quarter operating profit dropped about one-third, while it took a $425 million recall-related charge in the October-December quarter.

In February, Honda said its president, company veteran Takanobu Ito, would step down as the company works through the recall crisis, which it cited as a key reason for its declining profit.

Honda’s airbag recalls — and others involving its Fit compact car and Vezel SUV — diluted the positive impact of a sharp decline in the yen, which has inflated profits for major Japanese exporters, including the auto industry.

The results were “due primarily to an increase in selling, general and administrative… expenses including quality-related expenses and a decline in automobile unit sales in Japan,” it said in a statement Tuesday.

“This was despite profit-increasing factors such as strong sales in Asia and favourable currency effects associated with depreciation of the Japanese yen.”

Honda’s Tokyo-listed shares ticked up 0.32 percent to 4,330.5 yen with its results published after markets closed.

About 20 million vehicles produced by some of the world’s biggest automakers are being recalled due to the risk their Takata-made airbags could deploy with excessive explosive power, spraying potentially fatal shrapnel into the vehicle.

Honda recalls account for about 13 million of that total. The company’s biggest domestic rivals Toyota and Nissan, which report their results over the next couple of weeks, are also among the global automakers affected by the airbag crisis.

“The weak yen has had a big impact on Japan’s auto industry. Strong demand in North America has also benefited automakers, which helped to offset stagnant markets, including in Japan, where the impact of the tax rise (last year) dented consumer sentiment,” said Hiroaki Mochida, an analyst at Marusan Securities.

“The industry will continue to benefit from the weak yen. But Honda suffered from the recallsâ€¦and they remain a serious potential risk at time when using common parts is part of a global trend.”

Japan raised its sales tax to 8.0 percent from 5.0 percent in April 2014 — the first hike in 17 years — as Tokyo looks to boost tax revenue to pay down an enormous national debt.

But the levy rise hammered consumer spending and sent the economy into a brief recession, prompting Japan’s prime minister to delay a second hike originally slated for this year.