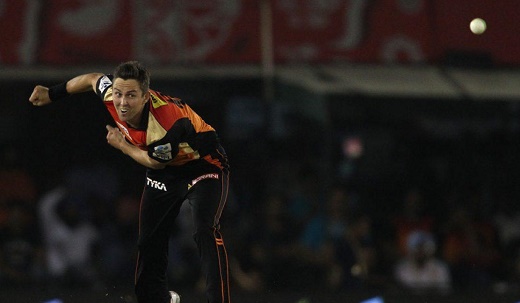 Asked to bat, opener Warner top-scored with a 41-ball 58 to lift Sunrisers to a modest 150 for six. The bowlers then produced a disciplined effort to restrict KXIP to 130 for nine in 20 overs, paving the way for the visiting side’s third win of the season.Â

Boult returned impressive figures of 3/19 in his four-over spell while Bhuvneshwar Kumar chipped in with two wickets. Wriddhiman Saha top-scored for KXIP with a 33-ball 42.Â

Earlier, A Ashish Reddy smashed 22 off eight balls towards the end with the help of two last-over sixes, helping Sunrisers reach the 150-mark.Â

In reply, Kings XI Punjab, playing without the veteran Virender Sehwag, were jolted by the early loss of Manan Vohra and Shaun Marsh, both batsmen playing on against Boult and Kumar respectively to leave the visitors reeling at 13 for two in the fourth over.Â

Murali Vijay, after spending some time in the middle for his 12 runs, made his way back to the pavilion following a terrible mix-up with David Miller (15) while going for what seemed an unnecessary second run.Â

Around the half-way mark, bottom-placed Punjab were struggling at 61 for four, requiring 90 runs from 60 balls to climb up the ladder.Â

The hosts were dealt another body blow when leg-spinner Karn Sharma bagged the wicket of Miller who skied one to Boult at long off. With the required run rate shooting up, Miller got a leading edge while trying to hit Sharma down the ground.Â

Skipper George Bailey got out as his mishit found Sharma at mid off after the batsman made 22 off 16 balls with the help of three boundaries.Â

At the other end, Saha was riding his luck as he got two lives. While Ravi Bopara could not latch on to a difficult one in the 15th over, Boult failed to judge one that went very high in the next over.Â

Saha and Axar Patel managed a few big hits to bring the equation down to 35 from the last three overs. However, Boult bowled Patel at the start of 18th over before getting the big wicket of Saha to dash KXIP’s hopes of pulling off a win in their first home game of the season.