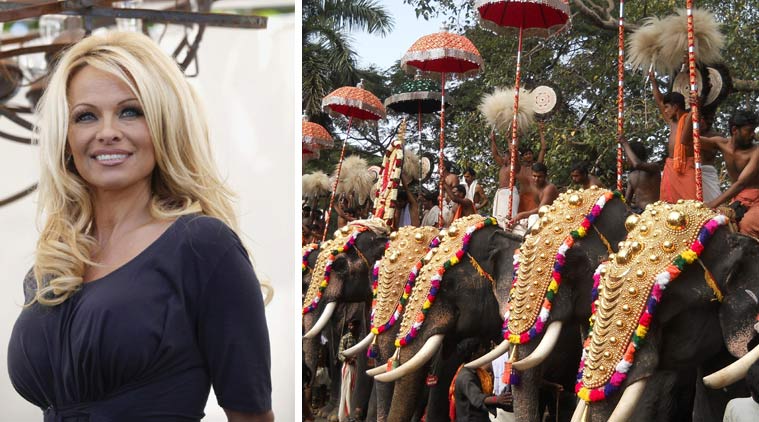 Who says Pamela Anderson is known just for altering her body? Come on! Ok, fine, she is â€˜moreâ€™ famous for that, but now, sheâ€™ll also be the one whoâ€™ll be known for her love for elephants. Even if that means that a number of people hailing from Kerala will strike her off their favourite list. Fame comes with its own price tag, you see!

Why, you ask? Hereâ€™s why. As the stage is set for Kerala’s iconic festival Thrissur pooram, the Hollywood actress has written to Kerala Chief Minister Oommen Chandy asking him not to the use elephants for the festival. Can you believe that? Yes, you should.

Her email comes in the wake of an Animal Welfare Board of India’s (AWBI) advisory telling Kerala officials to leave live elephants out of the upcoming Thrissur Pooram parade because they are not registered with AWBI which is required by law before any animal can be made to perform.

In her letter, Anderson, a long time People for Ethical Treatment of Animals (PETA) India patron offered to contribute the cost of providing 30 life-sized, realistic and portable elephants made of bamboo and papier-mache to replace live elephants “whose use is coming under increasing scrutiny because of changing public opinion.”

“I’m sure you know that both Indian and international public opinion is turning solidly against use of elephants in captivity,” she wrote, two days ahead of the Pooram to be held at Vadakkunnathan temple in Thrissur town.

PETA said although it is illegal to beat and torture animals, elephants forced to participate in parades are trained through physical punishment. She noted that the use of captive elephants would make visitors to Kerala also upset.

“Seeing elephants in chains and forced to walk on hot pavement under the threat of an ankush or other weapon makes people sad and can ruin their holiday,” she says.

PETA said capturing an elephant is prohibited under The Wildlife (Protection) Act, 1972. Yet, many captive elephants are thought to have been captured illegally from the wild, separated from their mothers and transported to Kerala.