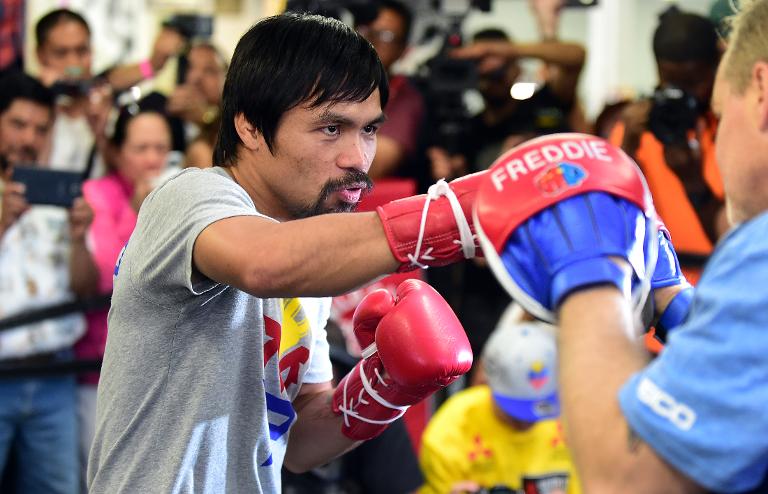 World boxing superstar Manny Pacquiao took time out Monday from final preparations for his $400 million megafight with Floyd Mayweather to plead for the life of a Filipina on death row in Indonesia.

Pacquiao, a national hero in the Philippines, added his voice to a chorus of global opposition led by United Nations Secretary General Ban Ki-moon to the executions of a group of eight foreign drug convicts, including compatriot Mary Jane Veloso.

The eight-division world champion, who will face unbeaten American Mayweather in the richest fight in boxing history in Las Vegas on Saturday, appealed to Indonesian President Joko Widodo to spare Veloso from the firing squad.

“I am begging and knocking at your kind heart that your excellency grant executive clemency to her by sparing her life and saving her from execution,” Pacquiao, who is also a Philippines congressman, told his country’s GMA News TV in a video call from his Los Angeles training camp.

“On May 2nd, I will be fighting in Las Vegas, Nevada against Floyd Mayweather, which is considered the fight of the century. It will be a great morale booster, if in my own little way, I can save a life,” a solemn-looking Pacquiao said.

Pacquiao’s statement came just hours after Veloso’s 55-year-old mother, Celia, made a desperate and tear-laden appeal for the ring icon known as the “National Fist” in the Philippines to help her daughter.

“Manny, please help save my daughter. Please speak up. Any word from you will help greatly because you are very popular in Indonesia,” she said on Manila radio station dzMM.

Ban on Sunday appealed to Widodo to consider a moratorium on capital punishment.

A huge social media campaign and celebrities such as Anggun, one of Indonesia’s most famous singers, have appealed on behalf of the eight foreign drug convicts from Australia, the Philippines, Brazil, and Nigeria who face death by firing squad on Tuesday after being served execution notices on Saturday.

But Indonesia signalled the executions would go ahead as preparations were “100 percent” complete, according to attorney general Muhammad Prasetyo.

Philippines President Benigno Aquino asked Widodo for “humanitarian consideration” for Veloso during a brief meeting on the sidelines of a Southeast Asian leaders’ summit in Kuala Lumpur on Monday, his spokesman, Herminio Coloma, said.

“He (Aquino) said President Widodo was sympathetic and was consulting with the Indonesian Attorney General on the legal issues,” Coloma said in an email, adding the two leaders would discuss the case again later Monday.

“Many countries are asking for clemency from Indonesia… We are hoping that this will sway the decision of the Indonesian president,” Jose told a news conference in Manila on Monday.

Veloso, a 30-year-old single mother of two young boys, claims she was duped into smuggling the drugs.

She said the 2.6 kilogrammes (5.7 pounds) of heroin found in her possession at Yogyakarta airport five years ago was sown into the lining of her suitcase without her knowledge.

Australian Foreign Minister Julie Bishop meanwhile asked Indonesia to halt the executions of two Australians among the eight, Myuran Sukumaran and Andrew Chan, until an investigation on corruption claims in their original trial was finished.