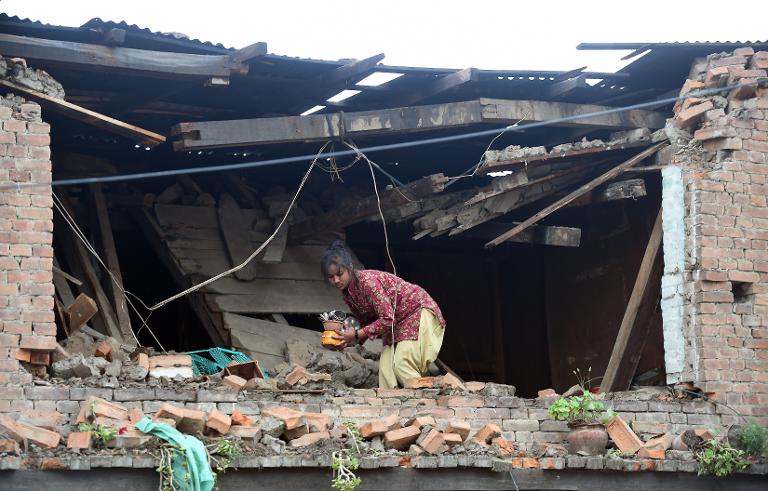 07:22 GMT – AFP IS NOW CLOSING the Live Report on the earthquake in Nepal as international teams equipped with heavy cutting gear and relief supplies start landing round the clock at the country’s only international airport on the outskirts of Kathmandu, which has been devastated by Saturday’s 7.8 magnitude quake.

Officials say more than 3,300 people are now known to have died, including 3,218 in Nepal — making it the quake-prone Himalayan nation’s deadliest disaster in more than 80 years.

Families, the sick and elderly have been packed into parks and other open spaces in Kathmandu after losing their houses, with others too terrified of aftershocks to return home.

On Mount Everest helicopters have been deployed to rescue about 150 climbers trapped at Camps One and Two after Saturday’s avalanche sent down slabs of ice and snow, cutting them off from base camp below, killing at least 18 people.

06:58 GMT – No more climbing – On Everest tourism department head Tulsi Gautam says three helicopters have been deployed “today to bring climbers down from camp one and two. They are safe but we need to bring them down because part of the route is damaged.”

“It is possible that climbing might not continue this year. However, there has been no official decision.”

06:22 GMT – “Fear and confusion” – Families, the sick and elderly have been packed into parks and other open spaces in Kathmandu after losing their houses, with others too terrified of aftershocks to return home.

“This is a nightmare, why don’t these aftershocks stop?” asks 70-year-old Sanu Ranjitkar, clutching her dog and with an oxygen mask strapped to her face, sitting under a tarpaulin.

With just sheets of plastic to protect them from the cold and rain, many say they were desperate for aid and information on what to do next.

“There is just too much fear and confusion,” says Bijay Sreshth, as he tries to listen to a radio in the hope of hearing a message from the government.

“We don’t know what to do next or for how much longer we are here.”

“We also need supplies of essential goods such as food and clean water to provide relief for survivors.”

06:17 GMT – Deadliest in over 80yrs – Officials say over 3,300 people are now known to have died, including 3,218 in Nepal — making it the quake-prone Himalayan nation’s deadliest disaster in over 80 years

05:45 GMT – Working to confirm – Japan’s foreign ministry says at least “one (Japanese) man in his 50s” was killed in the Everest avalanche, adding it is working to confirm the whereabouts of 1,011 Japanese workers.

Israel says it plans to airlift 25 infants born to surrogate mothers, and is sending a military delegation to repatriate about 700 Israelis.

Britain’s Foreign Office says hundreds of Britons were known to be visiting but that no deaths had been reported.

Australian authorities have confirmed the safety of over 830 citizens, but about 200 are still missing, the Associated Australian Press reports.

05:45 GMT – Difficult to know – Governments are trying to locate and help their citizens.

India has evacuated close to 1,000 nationals on military aircraft since Saturday, but foreign secretary S. Jaishankar says it is difficult to know how many were left.

China says it has evacuated over 1,000 citizens and airlines were racing to fly out 4,000 stranded tourists

Portugese tourist Heli Camarinha arrived the day before the quake and headed straight for one of Kathmandu’s overwhelmed hospitals to pitch in.

“When I saw the local news that hospitals need volunteers, I decided to come here to try and help.I have a first aid certificate and some experience in social work back home.

“I have been doing whatever I can, from cleaning the patient wards, helping transfer them to different hospital floors on stretchers, basically any way possible.”

05:21 GMT – Way out – Many foreigners are also looking for a way out of the country, which has always been a popular draw for tourists.

After spending the night huddled in a car with his family at the airport, New Zealander Michael Mackey says he is “still trying to get through to our travel agent to book any flight to leave Nepal.”

Czech tourist Martin Hulla and travel partner, Marie-Laure Parsy, spent the night in the gardens of the royal palace in Kathmandu.

“We were resting on our bed at the time of the earthquake. We rushed out of our hotel as the building started shaking very strongly,” Marie-Laure Parsy says.

“It was very cold. Now we have got a flight out of Kathmandu, to Thailand,” Hulla adds.

05:09 GMT – Financial assistance – Rajiv Biswas, chief Asia economist for the IHS global financial consultancy,says in a statement, the earthquake will have “a devastating impact on the economy.”

“Massive international disaster relief and rescue efforts will be needed urgently, as well as large-scale international financial and technical assistance for long-term reconstruction of the economy.”

“The total long-term cost of reconstruction in Nepal using appropriate building standards for regions vulnerable to severe earthquakes could exceed $5 billion, which is around 20 percent of Nepalâ€™s GDP.”

04:41 GMT – “It’s very painful” – Nepalese players at the World Table Tennis Championships in China have been worrying about family and friends and mourning those who have died.

“It’s hard to play, I just pray that everyone is safe. Some people I know are hurt, and some friends are dead. It’s very painful,” Elina Maharjan says in a press release from organisers.

Her doubles partner Nabita Shrestha says: “There could be another earthquake strike at any time and my parents and my family are staying (outside in a tent), so it is quite difficult.

“My old house got destroyed, but thank God nobody was sitting around there.”

04:15 GMT – Dharahara tower – The historic nine-storey Dharahara tower, a major tourist attraction, was among the buildings brought down in Kathmandu and police say around 150 people could have been inside at the time based on ticket sales.

“At least 30 dead bodies have been pulled out. We don’t have a number on the rescued but over 20 injured were helped out.”

“We haven’t finished our work there, rescue work is still continuing. Right now, we are not in a position to estimate how many might be trapped,” local police official Bishwa Raj Pokharel tells AFP.

04:09 GMT – “Finding survivors” – Rameshwor Dangal, who heads the home ministry’s national disaster management division, has told AFP that emergency crews will also step up their efforts to rescue those trapped in high-rise buildings which pancaked on Saturday.

“Our efforts today will also be focused on finding survivors in areas where big buildings have collapsed.”

03:59 GMT – Casualties – Neighbouring countries also suffered in the earthquake with at least 67 killed in India and 20 in China

03:40 GMT – “Heartbreaking” – The earthquake also triggered an avalanche on Mount Everest which buried part of base camp and killed at least 18 people.

“Weather good on Everest. Evacuation of C1 & C2 going well. I am safe in basecamp now …the injuries, fatalities & tragedy are heartbreaking”

C1 and C2 are camps further up from basecamp.

03:36 GMT – “Focus on rescue” – Nepalese home ministry spokesman Laxmi Prasad Dhakal has told AFP efforts are being stepped up to help remote areas closer to the epicentre of the quake.

“Our focus is on rescue. In far-flung areas, a larger helicopter will be stationed in the regional headquarters and smaller ones will shuttle with survivors.”

03:35 GMT – “Suffer like this” – With the ground still regular shaking from nerve-shredding aftershocks, many endured a sleepless and miserable night.

“We don’t have a choice, our house is shaky. The rain is seeping in but what can we do?,” says 34-year-old shopkeeper Rabi Shrestha as he camped out on the roadside.

“I don’t know why the gods want us to suffer like this.”

03:29 GMT – WELCOME TO AFP’S LIVE REPORT on the earthquake as International rescue teams and relief supplies begin arriving in Nepal’s devastated capital to help terrified and homeless survivors of a quake that has killed more than 3,200 people in the impoverished nation.

Equipped with heavy cutting gear and accompanied by sniffer dogs, rescue teams have been landing round-the-clock at the country’s only international airport on the outskirts of Kathmandu, the normally vibrant capital which has been devastated by Saturday’s 7.8 magnitude quake.

Officials say more than 3,300 people are now known to have died, including 3,218 in Nepal — making it the quake-prone Himalayan nation’s deadliest disaster in more than 80 years.