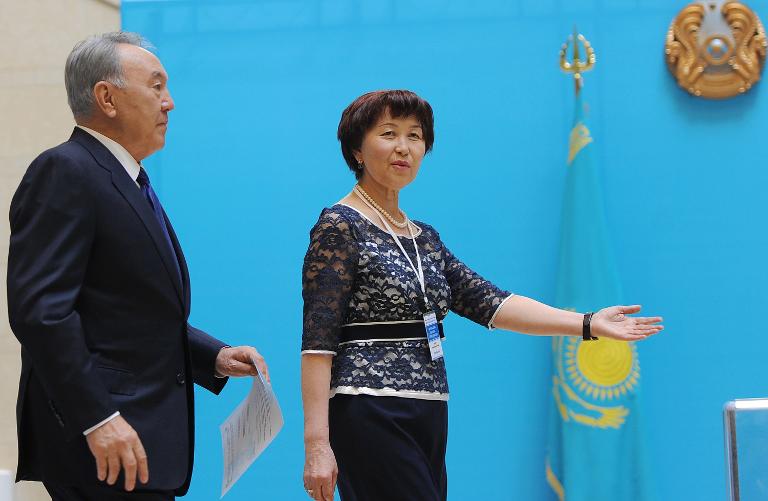 The exit poll carried out by the Institute for Democracy, a research company based in the authoritarian state, also showed Nazarbayev’s closest competitor Turgun Syzdykov as scoring 1.8 percent of the ballot and third candidate Abelgazy Kusainov taking 0.63 percent.

Kazakhstan’s Central Election Commission (CEC) claimed a record voter turnout of 95.11 percent for the poll whose result was never in doubt.

The CEC is expected to present preliminary results on Monday.

The marginalised opposition did not field a candidate for the election and 74-year-old Nazarbayev stood against two figures widely seen as pro-government.

Nazarbayev has ruled the vast Central Asian country since before the breakup of the USSR in 1991. His new five-year term will take him to three decades as leader.

He cast his ballot to loud applause in the capital Astana, saying he was confident Kazakhstan’s people would back his campaign.

“I am sure Kazakhstan’s people will vote primarily for the stable development of our state and the improvement of people’s lives, as well as the stability of the state and in support of the policies the country has implemented under my leadership,” Nazarbayev told journalists.

“I am confident of this.”

Many citizens standing in long, snaking queues at polling stations in Astana and in the largest city Almaty cited a “civic duty” to vote.

Gulmira Bardygulova, a student in Almaty, said she had voted for Nazarbayev to save the country from political turmoil.

“Young people themselves understand their duty — nobody is forcing us to vote. We have seen revolutions in Kyrgyzstan, war in Ukraine. Nobody wants this future for Kazakhstan.”

Some, though, complained of having been pressured to vote by their employers.

In Astana, one voter who refused to give her name but said she worked as a clerk complained everybody in her office had been rung up by a line manager and asked to vote.

“Of course I voted for Nazarbayev,” she said. “Who are the other two?”

One of the two candidates to stand against Nazarbayev, Syzdykov, is a 68-year-old former provincial official who campaigned on an anti-globalisation platform, railing against Hollywood, hamburgers and computer games. He represents the Communist People’s Party of Kazakhstan.

The other, Kusainov, 63, has held several important government positions and currently heads the national federation of trade unions. He was standing as an independent after running a campaign touching on Kazakhstan’s environmental problems.

Nazarbayev said he respected his opponents and was prepared to work with them after the election.

“The significance of the event is no more than the fact that it may well be Nazarbayev’s last.

Economic issues have come to the forefront in recent months in Kazakhstan, which is the most prosperous of the five ex-Soviet Central Asian states.

Kazakhstan’s domestic producers have been laying off workers as they struggle to compete with Russian imports made cheaper by the dramatic weakening of the sanctions-hit ruble.

Kazakhstan banned a number of Russian foodstuffs in March and April, citing standards violations, and has also restricted imports of Russian fuel. Moscow, traditionally viewed as a strong ally of the republic, implemented tit-for-tat measures this month.

Depressed prices for Kazakhstan’s main export, crude oil, have created a headache for the government, with ratings agency Standard and Poor’s downgrading the country’s sovereign credit rating from BBB+ to BBB — close to junk territory — earlier this year.

The strategic country, which borders both Russia and China, has never held an election deemed free and fair by international monitors.

Nazarbayev claimed victory in the last presidential election, in 2011, with 95.5 percent of the vote. Sunday’s ballot — called a year ahead of schedule — is the fifth he has contested.

In its interim report on the vote, the Organisation for Security and Cooperation in Europe (OSCE) raised concerns about Nazarbayev’s “institutional advantage”.

While Nazarbayev’s posters and billboards were “visible throughout the country,” the other two candidates have distributed “almost no campaign materials,” the OSCE said.

The OSCE sent nearly 300 observers to the vote and will deliver their verdict on Monday.

Over 9.5 million people in the ethnically diverse country were eligible to vote at over 9,000 polling stations across the country, according to the CEC.