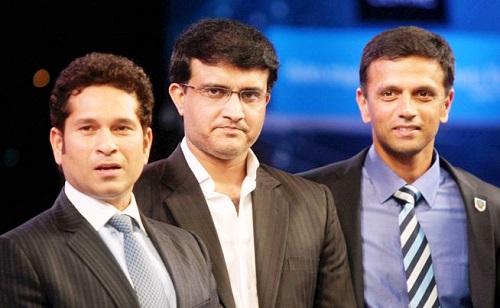 Kolkata: Former stalwarts Sachin Tendulkar, Sourav Ganguly and Rahul Dravid will be part of the committee which will find Indian cricket team’s new coach and the support staff.

The trio, according to sources, will provide inputs to BCCI president Jagmohan Dalmiya and secretary general Anurag Thakur, who were on Sunday entrusted with the job of finding the new coach at the working committee meeting of the board.

“The process to identify the coach and support staff for the Senior National team will be undertaken by the Hon. President and the Hon. Secretary,” a release from the Board of Control for Cricket in India (BCCI) said.

Zimbabwean Duncan Fletcher’s contract ended at the end of the World Cup, while former India cricketer Ravi Shastri was the with team in the capacity of team director.

It is expected that assistant coaches Sanjay Bangar, Bharath Arun and R Sridhar will be retained.

A working committee member made it clear that Ganguly will not be in the running for the coveted job even as speculation is rife that the former Indian cricketer is the top contender for the job along with Shastri.

“Since Sourav will be in the committee, he at least technically does not qualify for the job,” the member said.

The working committee also authorised Dalmiya to constitute a cricket advisory committee comprising prominent cricketers who will share their recommendations on the overall conduct and development of the game.

The working committee has decided to recommend batsman Rohit Sharma for the Arjuna award for the year 2015.

The working committee also paid homage to the departed young cricketers from Bengal, Ankit Keshri, Gaurav Kumar of Jharkhand and the unfortunate victims of the earthquake which devastated Nepal and India.

Keshri passed away after sustaining a head injury during a CAB senior one-day knock-out match. He was in hospital for three days and was showing signs of recovery but died on April 20 after a massive cardiac arrest.

The 20-year-old, a talented right-hander, had captained the Bengal U-19 team in Cooch Behar Trophy and was in the 30-member India U-19 probables list for the 2014 Colts World Cup in the United Arab Emirates. He was also playing for Bengal A (U-23 side) in the CK Nayudu National Championship.