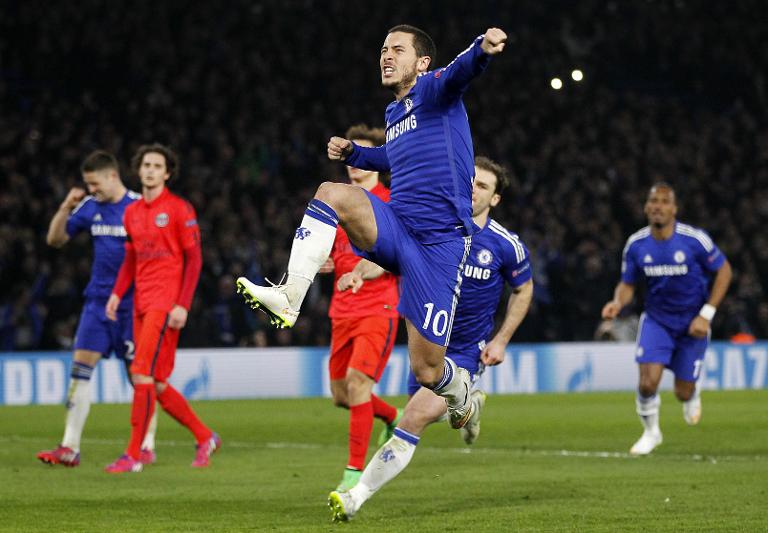 Chelsea midfielder Eden Hazard’s impressive season was recognised by his peers when he won England’s Professional Footballers’ Association Player of the Year award on Sunday.

The 24-year-old Belgian playmaker has scored 18 goals in all competitions so far this term, helping Chelsea win the English League Cup and leaving Jose Mourinho’s side poised to bring the Premier League trophy back to Stamford Bridge for the first time since 2010.

Victory in their next two matches — away to Leicester on Wednesday and at home to Crystal Palace next weekend — will see Chelsea, currently 10 points clear of nearest pursuers Arsenal and Manchester City, crowned champions of England.

Hazard, speaking at an awards ceremony at the Grosvenor House hotel that took place hours after Chelsea’s goalless draw with Arsenal across London at the Emirates Stadium, said: “I’m very happy. One day I want to be the best and what I did this season is play very well, Chelsea played very well.

“I don’t know if I deserve to win but it is good for me.”

He added: “It is good, it is better to be voted by the players — they know everything about football. This is good. I’m very happy.”

Last season saw Hazard win the PFA’s Young Player of the Year prize but he preferred to focus on Chelsea’s progress as a team rather than his own performances.

“We are almost champions, maybe this is the key,” said Hazard. “Last season we finished third and this season we have an opportunity to win the league. This has changed from last season.”

Hazard thanked Chelsea manager Jose Mourinho for giving him a relatively free hand on the field.

“Jose lets me play, we talk sometimes together and when I’m on the pitch I know what I have to do, this is most important,” he said.

Mourinho has long said Hazard’s talent is rivalled in current world football only by the enduring brilliance of Cristiano Ronaldo and Lionel Messi.

And last week, after Hazard scored Chelsea’s winner against United, the Portuguese manager said of Hazard: “I had lots of stars, but he is the humble star.

“He knows that he is one of the three best players in the world, the responsibility that comes (with that) and he is coping with that responsibility.”

Mourinho added: “He understands that his talent is fundamental for the team.”

Earlier on Sunday, Hazard was named in the PFA Premier League team of the year for the third time in three seasons in England.

He was one of six Chelsea players in the XI, a reflection of the Blues’ fine form, along with club captain John Terry, Gary Cahill, Branislav Ivanovic, Nemanja Matic and Diego Costa.

Meanwhile Harry Kane won the PFA Young Player of the Year award for 2014/15 after a stunning breakthrough campaign with Tottenham Hotspur, the club he has supported since boyhood.

The 21-year-old forward has scored 30 goals so far this season, a figure all the more remarkable given he did not command a regular starting spot until November.

Kane also helped Spurs reach the League Cup final, where they were beaten by Chelsea and, in storybook fashion, scored just 79 seconds into his England debut after coming on a substitute in a 4-0 European Championship qualifying win over Lithuania at Wembley last month.