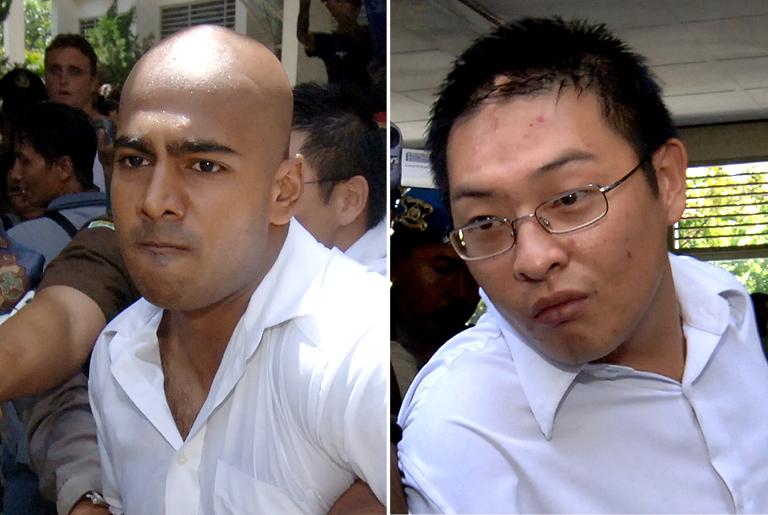 Australia urged Indonesia Monday to delay the execution of two men for drug offences until a corruption probe into their case is complete, after a report that judges sought tens of thousands of dollars in bribes.

“Bali Nine” drug traffickers Myuran Sukumaran and Andrew Chan could face the firing squad within days, along with others from Brazil, Nigeria, the Philippines and an Indonesian prisoner.

Australian media showed photos of crosses prepared by a mortician that will be used to mark their coffins, inscribed with the date 29.04.2015.

The Indonesian attorney-general’s office said the executions would take place this week but did not confirm a date.

Australian Foreign Minister Julie Bishop said the pair should not be shot while legal question marks remain over their cases.

“I should point out that Mr Chan and Mr Sukumaran’s lawyers are pursuing action before the Constitutional Court in Indonesia,” Bishop told ABC radio.

“And there’s also a separate investigation underway by the Indonesian Judicial Commission into claims of corruption in the original trial, and both of these processes raise questions about the integrity of the sentencing and the clemency process.”

But Tony Spontana, spokesman for the attorney-general’s office, said the Constitutional Court bid — the latest in a series of appeals by the men — was “not part of the legal process, so we won’t wait”.

Bishop spoke to her Indonesian counterpart Retno Marsudi on Sunday evening, while Prime Minister Tony Abbott has written to President Joko Widodo to renew his plea for the executions to be halted.

Abbott meanwhile stressed his opposition to the death penalty “in all cases” on a visit to Paris on Monday, a view echoed by French President Francois Hollande in a separate statement.

A Frenchman is on death row in Indonesia but is not among those facing execution within days.

On Monday Fairfax Media published allegations of corruption by the judges who sentenced the Australian pair in 2006, claiming they asked for more than one billion rupiah — around US$77,000 at the time — to pass a prison sentence of less than 20 years.

It cited their then-Indonesian lawyer, Muhammad Rifan, who claimed a deal fell through after an intervention by Jakarta, which allegedly ordered the pair be given the death penalty.

The lawyer said he decided to go public given that the executions were imminent and that the Judicial Commission, the Indonesian body that safeguards the probity of judges, had yet to complete its investigation into the alleged requests for bribes.

At least one of the judges in the case denied to Fairfax there had been political interference or negotiations about bribes.

Chan on Monday married his Indonesian girlfriend on the prison island of Nusakambangan, where Indonesia puts condemned prisoners to death, with his brother urging Widodo to show compassion to the newlyweds.

Earlier, the families of Chan, Sukumaran and Philippine convict Mary Jane Veloso headed to the island for what could be one of their last visits.

World boxing superstar Manny Pacquiao took time out from preparations for his megafight with Floyd Mayweather to plead for the life of Veloso, adding his voice to a chorus of global opposition led by United Nations Secretary General Ban Ki-moon.

“I am begging and knocking at your kind heart that your excellency grant executive clemency to her by sparing her life and saving her from execution,” Pacquiao said in an appeal to Widodo.

However, there was more bad news for Veloso Monday, with the Philippine department of foreign affairs confirming her application for a second judicial review of her case had been rejected.

Authorities said the Frenchman on death row, Serge Atlaoui, who had unexpectedly been left out of the forthcoming batch of executions, would be put to death alone if an outstanding legal appeal is rejected.