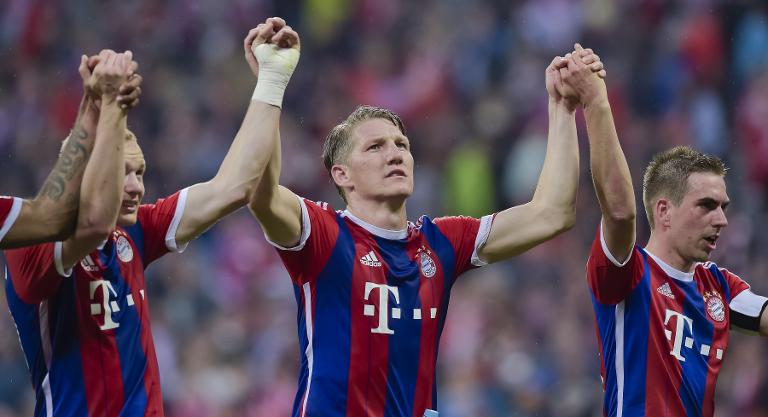 Bayern Munich were confirmed as German champions for the 25th time on Sunday as Wolfsburg’s 1-0 defeat at Borussia Moenchengladbach meant Pep Guardiola’s Bavarians can no longer be caught.

Bayern had picked up their 24th victory in 30 league games on Saturday when Bastian Schweinsteiger’s late goal sealed a 1-0 home win over Hertha Berlin at the Allianz Arena.

“It’s already something just to have defended the title,” Bayern chairman Karl-Heinz Rummenigge, who promised a “big celebration” when the season is over, told FCBayern.de.

“But I have to compliment the coach and the team, they did a great job in the season after a World Cup, in which many of our players were involved.”

The Bavarian giants have now won three consecutive German league titles with Guardiola winning the Bundesliga title in each of his two seasons in charge.

The Spaniard has won a total of 19 titles as a coach, after lifting 14 trophies during four years as Barcelona boss, and has already claimed five more since joining Bayern in July 2013.

There is no time for Bayern to rest on their laurels, however, as they face a busy few weeks and are still in the running to repeat their 2013 treble of European, league and cup titles.

They host arch-rivals Borussia Dortmund on Tuesday in the German Cup last four clash for a place in the final at Berlin’s Olympic Stadium on May 30.

With the league secure, Guardiola’s Bayern face a mouth-watering Champions League semi-final, first-leg at his ex-club Barcelona on May 6, with the return leg six days later.

“At some point we’ll gather on the town hall balcony and then really party hard with our fans,” promised Bayern captain Philipp Lahm.

While the celebrations kicked off in Munich, Gladbach also had reason to cheer as Kruse’s last-gasp goal put them third and a step closer to an automatic Champions League place.

Earlier on Sunday, Paderborn blew a two-goal lead to stay in the relegation places after their 2-2 draw with Werder Bremen and had midfielder Michael Heinloth was sent off.

Paderborn remain 17th with VfB Stuttgart bottom despite their 2-2 draw at home to Freiburg.

On Saturday, Hamburg boosted their hopes of avoiding a first relegation from Germany’s top-flight with a dramatic 3-2 win over Augsburg, to climb off the bottom and up to 16th.

Schalke’s 2-0 defeat to Mainz on Friday and Augsburg’s loss in Hamburg left both Hoffenheim and Borussia Dortmund within striking distance of the Europa League places.

Dortmund eased to a 2-0 win at home to Eintracht Frankfurt thanks to goals by Pierre-Emerick Aubameyang and Japan’s Shinji Kagawa while Hoffenheim won 2-1 at Hanover.

Bayer Leverkusen drop to fourth after their 1-1 draw with Cologne as Julian Brandt’s first-half goal was cancelled out by Bard Finne’s late equaliser in the Rhine derby.