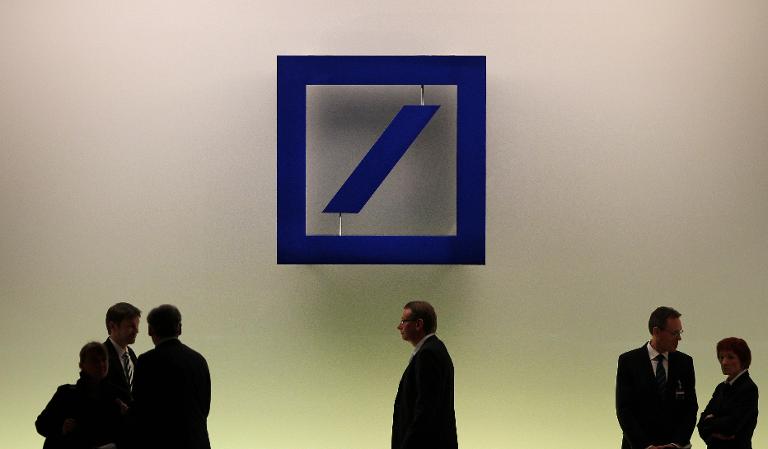 Deutsche Bank, Germany’s biggest lender, unveiled Monday details of a huge strategic shake-up in which it will rid itself of its Postbank unit and massively curb costs.

Ending months of feverish speculation, Deutsche Bank finally lifted the veil on its blue-print for the future, bringing down annual costs by 3.5 billion euros ($3.8 billion) by 2020 and confronting the challenges of increased financial sector regulation and current low interest rates.

The plans entailed the flotation of the bank’s Postbank unit at the end of next year, the closure of up to 200 high-street branches by 2017 and a “re-focus” of its geographical footprint whereby it would exit or reduce its presence in some countries.

“Our course for the next five years is simple: we are focusing to deliver value,” said co-chief executives Anshu Jain and Juergen Fitschen.

“We are confident that, by 2020, Deutsche Bank will be better capitalized and less leveraged; more cost-efficient; well-funded; more value-creating for shareholders; and better governed, with stronger systems and controls,” they said.

Deutsche Bank said it recognised that the centres of global economic power “are shifting toward key emerging markets and cities.”

The group therefore aimed to “refocus our global footprint, reducing the number of countries or local presences by 10-15 percent and actively investing in markets and urban centres which are most relevant to international and multinational clients,” it said.

Deutsche Bank said it also sought “to transform its operating model by simplifying its structure, strengthening its controls, and becoming more efficient, more resilient and more resolvable” — efforts designed to bring down annual costs by 3.5 billion euros by 2020.

In order to achieve these savings, Deutsche Bank anticipated one-off costs of 3.7 billion euros, it said.

Postbank was privatised in 1995 and listed on the stock exchange until it was gradually taken over by Deutsche Bank between 2008 and 2010.

It employs a workforce of 9,800 and has some 14 million customers in Germany, but has not proven as profitable as Deutsche Bank would have hoped.

More than 100 Postbank employees had demonstrated outside the parent group’s headquarters on Friday over concerns about the subsidiary’s future.

Deutsche Bank said it planned to “re-IPO Postbank and expects its deconsolidation by the end of 2016.”

Deutsche Bank as a whole employs more than 98,000 people and has annual revenues of some 32 billion euros, but is torn between its investment banking ambitions on the one hand and its retail banking activities on the other, a dichotomy reflected in the dual leadership under former investment banker Jain and Fitschen.

The two CEOs insisted that it did not intend to let go of the universal bank strategy.

“We reaffirm our commitment to being a leading global bank based in Germany,” they said.

Philipp Haessler, banking analyst at Equinet, said the group’s goals “don’t appear to be too ambitious and are attainable.”

The biggest challenges facing the group were the various litigation battles it was embroiled in, the analyst said.

On Sunday, Deutsche Bank announced that legal costs sliced profits by around half in the first three months of this year.

Deutsche Bank has to pay a record $2.5 billion for manipulating interest rates in a multi-bank conspiracy that undermined global financial markets.

Another legal headache for the group is a trial opening this week against five executives, including co-CEO Fitschen, on allegations he gave false evidence in a long-running legal battle with the defunct Kirch group.

All five have denied any wrongdoing.