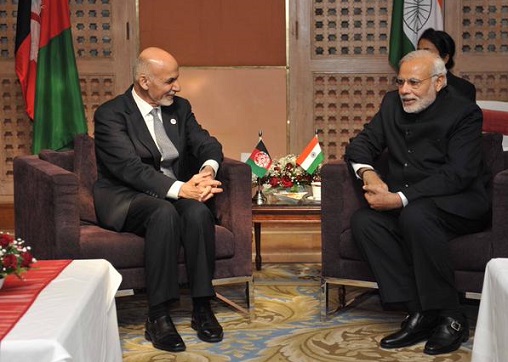 He will meet Prime Minister Narendra Modi on Tuesday in the national capital. This will be followed by several other meetings by Ghani with Indian officials, businesses and think-tanks.

During the visit, both sides are expected to take up bilateral matters ranging from a pending arms deal to Indiaâ€™s involvement in the development of the war-torn country.

Ghani’s much-awaited trip to India, after his trips to China, Pakistan and USA, has raised expectations of expanding bilateral strategic partnership amid the security situation in Afghanistan and increasing footprints of Islamic State in the war-torn country. This will be also a chance for New Delhi to regain ground lost to regional rivals Pakistan and China.

AfghanistanÂ has been pushing for an arms deal with India under theÂ Strategic Partnership AgreementÂ (SPA) for the past two years. The agreement was signed in 2011. Afghanistan, under its former president Hamid Karzai, had made several attempts to procure military weaponry, such as fighter jets, missiles and field guns, under the pact.

Under the SPA, India had been only supplying non-lethal defence equipment such as communication devices and transport equipment. However, the Modi-led government is reportedly keen to have the arms deal go through with Afghanistan.

India is also keen to resume the talks for having the $7.6-billionÂ TAPIÂ (Turkmenistan, Afghanistan, Pakistan and India) natural gas pipeline project with Afghanistan. Several Indian companies are also involved in developing the mining industry there.

India has committed $2 billion for reconstruction efforts in war-ravaged Afghanistan. Once seen on the side of the former Soviet Union, which had occupied the country for a decade till 1989, India has been trying to shore up goodwill among the Afghan people since the fall of the Taliban government in 2001.

Modi invited Ghani to visit India when he met him on the sidelines of the SAARC summit last year in Kathmandu. This visit is expected to push Modi’s vision of strengthening the South Asian Association for Regional Cooperation (SAARC).

Ghani visited China on his first official visit after taking over in October and visited Pakistan in November. His predecessor Hamid Karzai had visited India a dozen times during his tenure.

On April 14, Afghan first lady Rula Ghani had met India’s external affairs minister Sushma Swaraj in Delhi. Last month, Afghan chief executive Abdullah Abdullah was in Delhi. Prior to this, Swaraj and foreign secretary S Jaishankar had travelled to Kabul to meet the new leadership there.