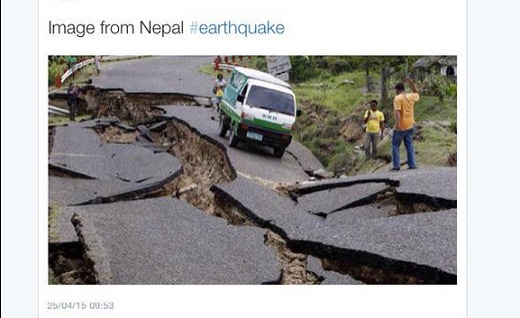 New Delhi: Rumour mongers are at it again as they are circulating fake earthquake tremor stories and warnings on social media to create panic.

“Many comments come on social media that earthquake is going to happen at this hour. We should adopt restraint and not spread rumours on social media. I also appeal to people not to pay attention to such rumours being spread on social media,” Telecom and IT Minister Ravi Shankar Prasad said.

NASA has made no earthquake forecast for India, the government said on Sunday, and asked people to ignore text messages with a “fake” prediction of a strong quake to hit north India. Some of the messages doing the rounds on Whatsapp and Facebook are:Â

“NASA says something bigger than the already experienced earthquakes might follow. This will continue for weeks
Indian subcontinent is sliding under eurasian plate
This is a major tectonic movement
Not just a one time shock
Theoretically this was expected for long.”Â

Please be alert and take care. Spread the word.”

“The eartquake is yet coming after 7 hours .
North India will face next earthquake at 8:06 p.m.
Govt.of india is saying not to go in their
houses. The next richer scale of earthquake will
be 8.2 .
News From NASA.
Plz forward the message as much as u can.”Â

“It is fake. The NASA (National Aeronautics and Space Administration) cannot predict earthquakes. Such messages are only seeking to create panic among people,” a seismologist at the India Meteorological Department (IMD) said.

Scotching the rumours, the IMD said the Indian government had received no such intimation from the US.

“No country can predict earthquakes. The technology has not advanced so much as yet. There is some research going on in China, but even they have not reached any substantial result,” the official said.

Purported as a NASA forecast, a text message doing the rounds among mobile phone users in parts of India reads: “North India will face next earthquake at 8.06 p.m… The next richer (Richter) scale of earthquake will be 8.2. News from NASA. Plz forward message as much as u can.”

Panicked, people on Sunday called up media houses to check the veracity of the message.

The government clarified that “there is no substance in such messages”, adding “it is not possible to forewarn unless the earthquake has actually struck”.