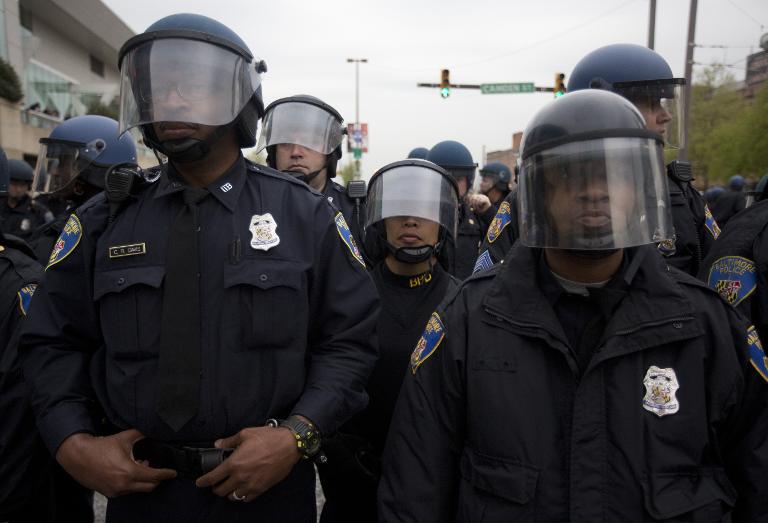 Police arrested 34 people when protests over the death of a black man in custody spiraled into violence in Baltimore, authorities said, calling for calm in the tense US city.

Six police officers were also injured in the disturbances late Saturday, a spokesman said, in the latest demonstrations in the United States over what critics say are overly aggressive police tactics, particularly when it comes to confronting African Americans.

Baltimore, a blue-collar city about an hour from the capital Washington, was on edge Sunday and police were out in force, as a wake was held for the 25-year-old Freddie Gray.

Gray, who died one week ago after his spine was allegedly nearly severed following his arrest on April 12, was to be buried Monday in what is likely to again be a major rallying point for angry demonstrators.

“A small contingent of yesterday’s protesters caused violent disruptions downtown and in west Baltimore last night and early this morning after what had been mostly peaceful protests throughout the day,” police spokesman Jeremy Silbert said.

“Additionally, multiple storefronts were vandalized and several police vehicles and other property was damaged.”

Congressman Elijah Cummings, who represents the Baltimore district where the violence took place, said he was pleased that the US Justice Department was undertaking a “top to bottom” probe of the city’s police department.

“We’ve got to take this department apart and try to figure out what is wrong and what is right,” Cummings told CBS television’s “Face the Nation” program.

“This is a significant moment. If we don’t correct this now, it will only get worse.”

Saturday’s demonstrations drew thousands of protesters, news reports said, in the biggest show of outrage so far over Gray’s death.

Initially, the 90-minute rally at city hall demanding justice for Gray was peaceful.

But the mood shifted dramatically when scores of protesters moved to the vicinity of the city’s Camden Yards baseball stadium, scene of an evening Baltimore Orioles-Boston Red Sox game.

“My family wants to say: Please, please stop the violence. Freddie would not want this,” she said amid the violence.

She spoke alongside Mayor Stephanie Rawlings-Blake, who said she was “profoundly disappointed” by violence she blamed on “a small group of agitators.”

Street signs were torn down, and one motorist got a rock through her car window, local news media reported.

Fans at the baseball game, which went beyond the standard nine innings due to a tie, were told to remain in the stadium, “due to an ongoing public safety issue,” until gates were opened for them to leave.

One police spokesman blamed the trouble on “isolated pockets” of individuals who were believed to have come from out of town.

Tensions have been simmering in Baltimore, a port city of 620,000, as investigators try to establish the circumstances that led to Gray’s death.

During a press conference Friday, Baltimore officials acknowledged Gray should have received medical help at the moment of his arrest, when he was seen by bystanders — and caught on video — howling in apparent pain.

They also revealed that Gray, contrary to police department policy, was not buckled into his seat in the van, which made at least three unexplained stops on its way to the Western District police station.

Six officers have been suspended with pay as the police investigation inches closer to a May 1 deadline to submit findings to a Maryland state prosecutor, who could decide to press charges.

Gray’s death is the latest in a string of high-profile confrontations between African Americans and police, including the fatal shooting of unarmed teenager Michael Brown in August in the St Louis suburb of Ferguson.