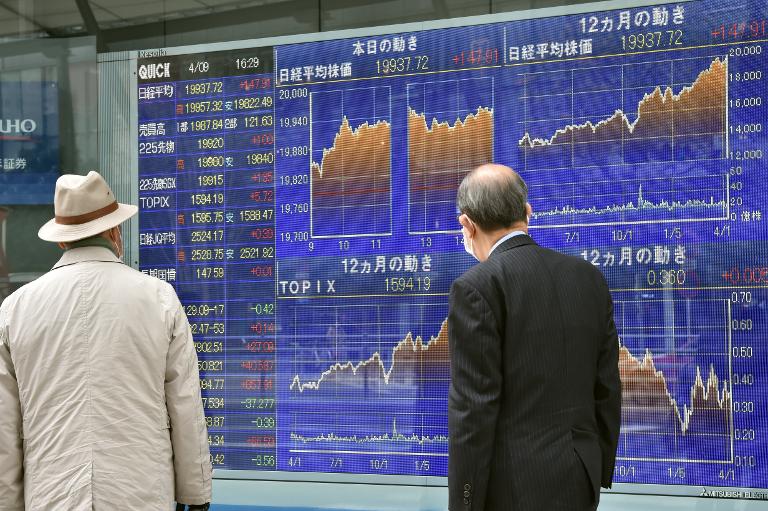 The euro held up despite nervousness as Greece tries to hammer out a bailout reform deal with creditors that will unlock much-needed cash to service its debts.

Shanghai and Hong Kong continued their upsurge as a recent run of weak data fuels expectations Beijing will add to its two interest rate cuts since November and two reductions in bank reserve requirements.

Hong Kong’s market has jumped about 15 percent this month as mainlanders rush into it after a year-long rally in Shanghai that has seen the benchmark index more than double.

Adding to confidence in mainland shares was a report that China is considering more than halving the number of state-owned firms through mergers and restructuring as part of a drive to boost the economy.

“Big oil names are soaring because of speculation that the government is studying mergers in the industry,” said Clement Cheng, a trader at RBC Investment Management Asia in Hong Kong.

“The oil sector has been undervalued for a long time.”

The gains came after official figures showed orders for US durable goods surged four percent in March, driven by a jump in orders for civilian and military aircraft as well as autos.

But with those elements stripped out, the report showed an 0.2 percent decline in orders, underscoring the weakness of US non-transport industries — partly due to the strong dollar.

“Friday’s US durable goods orders report was sufficiently weak to power US stock indices to new record highs, such was the ‘zero (interest rates) for longer’ interpretation of the data,” Ray Attrill, global co-head of foreign-exchange strategy at National Australia Bank, wrote in a note Monday.

The single currency has maintained its relative strength despite uncertainty about Greece’s future in the eurozone as it struggles to find cash to pay its bills.

Greece has been trying to negotiate a deal that would unlock 7.2 billion euros in bailout funds needed to avoid default and a possible eurozone exit.

In a bid to speed up negotiations, Tsipras met Jeroen Dijsselbloem, head of the Eurogroup of finance ministers.

The group, which is in charge of the negotiations on Greece’s debt, will hold a teleconference with Athens Monday, and a second meeting in person on Wednesday in Brussels.

The developments come after EU ministers heaped pressure on Greece Friday to speed up negotiations, after a meting in Riga last week ended without a breakthrough.

On oil markets US benchmark West Texas Intermediate for June delivery eased 21 cent to $56.94 while Brent crude for June fell eight cents to $65.20.

— Wellington was closed for a public holiday.