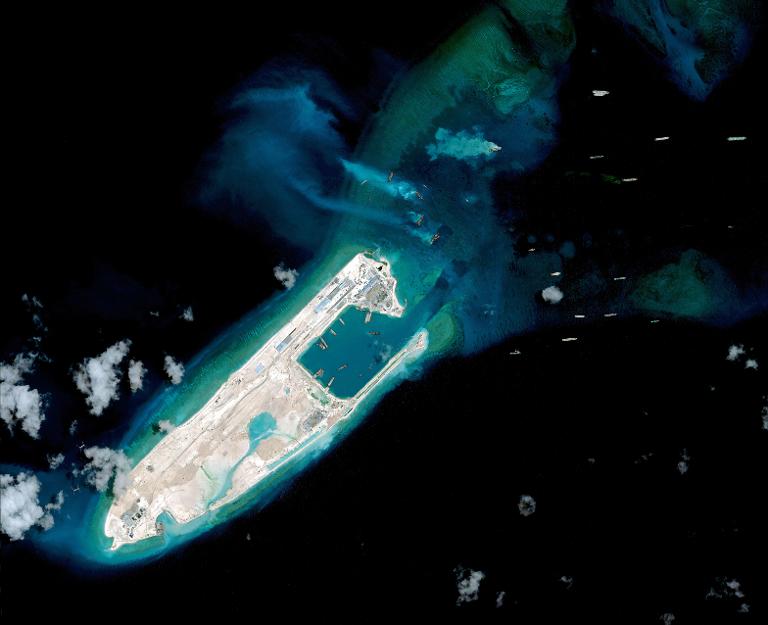 Chinese island-building efforts in the disputed South China Sea, where airstrips are being built on coral reefs, risk undermining “peace, security and stability” in the region, Southeast Asian leaders warned at a regional summit on Monday.

Beijing’s assertion to almost the entire strategic body of water — also claimed in parts by several Asian nations — has set off alarm bells with its neighbours and beyond as China stakes its claim with growing boldness.

A statement to be issued at the close of the one-day summit notes “serious concerns” over land reclamation on reefs whose sovereignty is contested, which has triggered fears of tightening Chinese control of the seaway.

“We share the serious concerns expressed by some leaders on the land reclamation being undertaken in the South China Sea, which has eroded trust and confidence and may undermine peace, security and stability,” said the statement by summit chair Malaysia, seen by AFP.

Association of Southeast Asian Nations (ASEAN) member-states Vietnam, the Philippines, Malaysia and Brunei claim parts of the sea, which is rich in energy reserves, fishery resources, and is a vital conduit for much of world trade.

But Beijing says nearly all of it is “indisputable” Chinese maritime territory.

Satellite photos released earlier this month provided fresh evidence of the scale of the Chinese programme, depicting a flotilla of Chinese vessels dredging sand onto a feature known as Mischief Reef in the Spratly Islands.

Other photos showed a runway and ship harbour taking shape on Fiery Cross, also in the Spratlys, which was little more than a reef when work began late last year.

Similar work is taking place at a handful of other sites, according to defence analysts, who say the construction drive will give China a permanent forward presence far out at sea from which to project its growing power.

The closing statement by Malaysia — which holds the rotating chair of 10-member ASEAN this year — instructs the region’s foreign ministers to “urgently address this matter” under dialogue mechanisms set up between the bloc and China.

But it stopped somewhat short of a call by the Philippine foreign secretary, who on Sunday challenged ASEAN to “finally stand up” to Beijing and demand an immediate end to the reclamation.

Albert del Rosario had warned his regional peers in Kuala Lumpur that China was “poised to consolidate de facto control” of the sea.

But Malaysia has brushed aside suggestions of a response that might antagonise China.

Malaysian Prime Minister Najib Razak said in an address opening Monday’s summit that ASEAN must deal with the issue in a “positive and constructive way.”

Despite its unity rhetoric, ASEAN members have diverging agendas, and the bloc avoids especially robust responses toward China on behalf of its members.

This is due to Beijing’s immense trade and diplomatic leverage and because not all ASEAN states have a stake in the maritime disputes.

The Philippines and Vietnam have been in the most direct face-offs with China at sea, including a number of tense confrontations in recent years.

Najib is expected to shift summit attention to his plans to formally declare the year-end establishment of an “ASEAN Economic Community” (AEC), a proposed single economic market with free flow of goods, capital and skilled labour across borders.

Diplomats say realisation of the ambitious vision remains far-off due to significant non-tariff barriers, and other policy challenges. They concede the declaration means little for day-to-day trade.