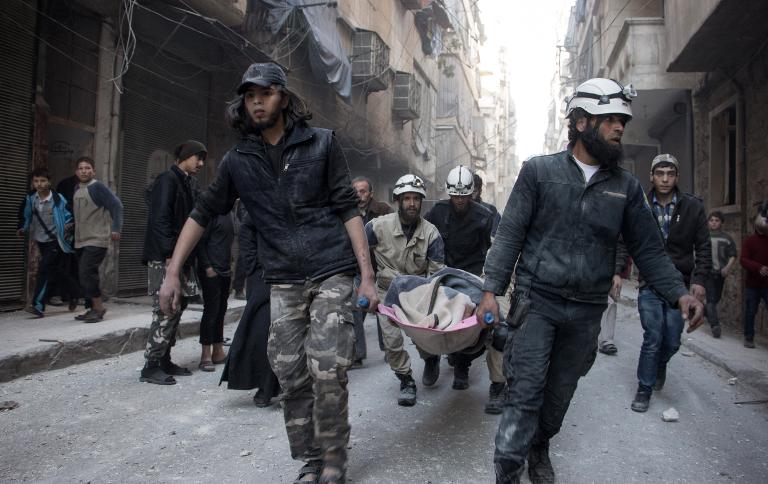 Air strikes on a marketplace Sunday killed at least 40 civilians, including women and children, as Syrian forces stepped up attacks on rebels a day after losing a key border town.

There were fears the death toll would mount from the bombing raids on Darkush, a rebel-held town near the Turkish frontier, which also wounded dozens of people, a monitoring group said.

The attacks came after rebel groups including Al-Qaeda’s Syrian affiliate overran the nearby town of Jisr al-Shughur on Saturday, tightening their grip on the northwestern province of Idlib less than a month after capturing its capital.

“At least 40 civilians were killed in regime air strikes on a market in the town of Darkush. Among the dead were nine women and eight children,” said Rami Abdel Rahman of the Syrian Observatory for Human Rights.

Jisr al-Shughur was one of the regime’s last remaining strongholds in the northwestern province, and its fall has left government-held territory elsewhere in neighbouring Latakia and Hama provinces open to new attack.

Overnight and on Sunday, government warplanes pounded Jisr al-Shughur with several dozen air strikes as fighting raged on the ground south of the city, said the Britain-based Observatory.

“At least two civilians and 20 fighters were killed in the Saturday air strikes along with five others whose identities are not yet known,” Abdel Rahman told AFP.

“The toll is expected to rise after the bombing continued overnight and into Sunday.”

The clashes in the south of Jisr al-Shughur came after government forces launched a failed bid to rescue at least 40 soldiers loyal to the regime of President Bashar al-Assad.

State television said government forces had attacked an area by the southern entrance to the town, “killing a group of terrorists”, but made no mention of any captured soldiers.

It charged that “terrorist groups carried out a horrific massacre of more than 30 civilians, mostly women and children, after entering Jisr al-Shughur”.

But it gave no further details of the alleged killings, and the Observatory said it had received no reports of any massacre of civilians.

On Saturday, the Observatory said its sources had seen the bodies of at least 60 regime loyalists in the streets of Jisr al-Shughur after the battle for the town.

It said at least 23 prisoners had been summarily executed by government forces before their withdrawal.

The Al-Qaeda-affiliated Al-Nusra Front posted photographs on Twitter of what it said were the bodies of the murdered prisoners.

“It’s the end of the loyalist counteroffensive that began in spring 2013,” said Pierret, a lecturer on contemporary Islam at the University of Edinburgh.

But he noted that while the regime is “in a position of weakness, that doesn’t mean it’s going to fall tomorrow.

“In 2012, the regime survived despite experiencing greater disasters.”

More than 220,000 people have been killed in Syria since the conflict began in March 2011 with anti-government protests that escalated into an armed rebellion.