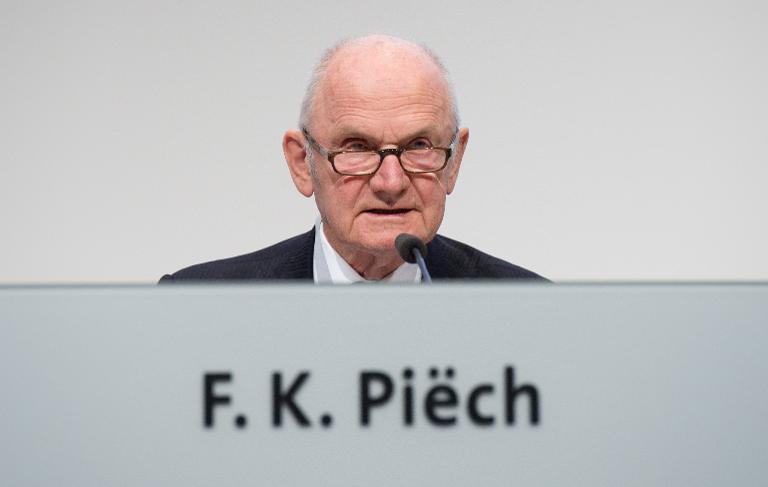 Volkswagen patriarch Ferdinand Piech has resigned as head of the German auto giant’s supervisory board, the company announced Saturday, in the wake of his bitter power struggle with the VW chief executive.

The news came two days after Piech rejected media reports that he was plotting to oust the carmaker’s CEO Martin Winterkorn.

But Piech, a member of the powerful Porsche dynasty that is a shareholder in Volkswagen, and one of the most important figures in German business, sent shockwaves through the industry last weekend by declaring in a magazine interview that he was “distancing himself” from Winterkorn.

Volkswagen had attempted on Friday to draw a line under the management tug-of war, saying it would extend Winterkorn’s contract.

According to German public broadcaster NDR even after that decision 78-year-old Piech was plotting to have 67-year-old Winterkorn replaced.

Piech was trying to drum up a majority on the full supervisory board to have the CEO removed from his post, NDR reported.

Ironically, it was Piech who had installed Winterkorn as VW boss in 2007.

But he appears to have become irked by his former protege’s difficulties in areas such as making substantial inroads into the US market and VW’s over-dependence on the Chinese market.

Winterkorn had been seen as Piech’s close ally and heir apparent and the idea of a poisonous rift between the two ignited fears about the future running of Europe’s biggest carmaker, whose empire spans 12 brands and annual sales of 200 billion euros ($215 billion).

In a statement Saturday, influential members of the supervisory body said that “in view of the past weeks, the mutual trust necessary for good collaboration was no longer present,” precipitating Piech’s departure.

Vienna-born Piech gave up all his positions in the VW group with immediate effect, along with his wife Ursula Piech — a former family nanny — who had been on the VW board since 2012.

He will be provisionally replaced by deputy chairman of the supervisory board Berthold Huber, according to the company statement.

Piech is the grandson of the inventor of the iconic Beetle, the model on which VW’s fortune was built, and was himself VW’s chief executive between 1993 and 2002, before becoming its supervisory board chief.

But the veteran auto executive appeared to be facing criticism for being out of step with the times.

“The big global players who want to succeed in the 21st century are run differently,” it said.

Piech’s departure will open a new chapter for the Volkswagen group which must now choose a successor to steer the world’s second largest automobile maker.