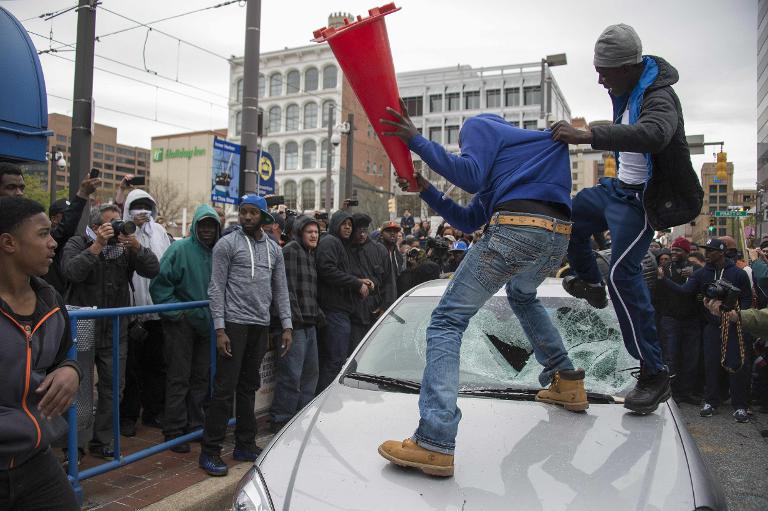 Protesters rampaged through downtown Baltimore as the city’s biggest demonstration yet over the death of a young African-American man in police custody turned violent.

More than 1,000 people had joined a peaceful 90-minute rally at city hall on Saturday, demanding justice for Freddie Gray, 25, who died last Sunday from spinal injuries, a week after his arrest in west Baltimore.

But the mood shifted dramatically when scores of protesters moved to the vicinity of the Camden Yards baseball stadium, scene of an evening Baltimore Orioles-Boston Red Sox game.

“My family wants to say: Please, please stop the violence. Freddie would not want this,” Gray’s twin sister Fredericka said.

She spoke alongside Mayor Stephanie Rawlings-Blake, who said she was “profoundly disappointed” by violence she blamed on “a small group of agitators.”

Street signs were torn down, and one motorist got a rock through her car window, local news media reported. At least one city bus was also struck.

Five police cars were seen by an AFP photographer getting their windows smashed, before riot-equipped police intervened.

Fans at the baseball game, which went beyond the standard nine innings due to a tie, were told to remain in the stadium, “due to an ongoing public safety issue,” before the gates were opened for them to leave.

One police spokesman blamed the trouble on “isolated pockets” of individuals who were believed to have come from out of town.

Tensions have been simmering in the blue-collar Mid-Atlantic port city of 620,000 as investigators try to establish the circumstances that led to Gray’s death.

Speakers at the city hall rally called for President Barack Obama to launch a national inquiry into police misconduct, following a series of fatal confrontations between white police officers and African-American men and boys.

“It has to stop. It really has to stop because it could have been any one of us,” a young male adult member of Gray’s extended family told the crowd.

In a press conference Friday, officials acknowledged Gray should have received medical help at the moment of his arrest, when he was seen by bystanders — and caught on video — howling in apparent pain.

They also revealed that Gray, contrary to police department policy, was not buckled into his seat in the van, which made at least three unexplained stops on its way to the Western District police station.

Gray died Sunday with 80 percent of his spine severed at the neck, lawyers for his family have said. His funeral is scheduled for Monday.

Six officers have been suspended with pay as the police investigation inches closer to a May 1 deadline to submit findings to a Maryland state prosecutor, who could decide to press charges.

Gray’s death is the latest in a string of high-profile confrontations between African Americans and police, including the fatal shooting of unarmed teenager Michael Brown in August in the St Louis suburb of Ferguson.